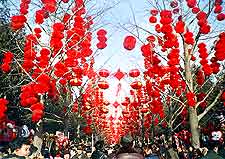 Beijing really is a city that never sleeps, and whilst there are always plenty of things to do whatever the time of year, many seasonal festivals provide true monthly highlights and are really not to be missed. Particularly popular are the celebrations during the Chinese New Year, which take place all over China and are especially notable here.

Other events that stand out each year in Beijing include the Lantern Festival in March and the Oingming Festival every April, the latter of which heralds the arrival of spring whilst also being something of a time of remembrance.

The Dragon Boat (Duanwu Jie) celebrations every June are also well worth checking out, with these fun boat races being held at Qinglonghu Park and Xiadu Park, as well as on the Tonghui River and along the shoreline of Yanqi Lake. The largest boats are powered by more than 50 rowers, who follow the rhythm set by a drummer sitting at the front.

The People's Republic of China features a total of nine national public holidays each year: