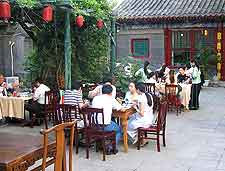 Eating out in Beijing could quite possibly be the highlight of your visit. The restaurants in Beijing are superb and usually quite inexpensive. and seem to taste even better when eaten with chopsticks.

In the past decade, the international dining scene in Beijing has exploded and visitors will easily be able to satisfy their taste buds, with many extremely tourist friendly restaurants even featuring English menus. Beijing is actually home to its very own style of Chinese cuisine, which is known locally as 'jingcài' and is one of the country's four main types of cooking. 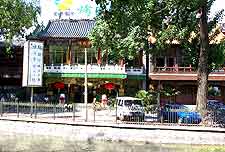 Beijing is a massive city and it is usually not far to find a place to eat all around the clock, with some street stalls and eateries staying open 24-hours a day. Beijing is a typically Chinese city and serves breakfast extremely early, from 06:00 until around 09:00 or slightly later. For lunch, most restaurants open between 11:00 to 14:00, reopening for dinner at around 17:00 and closing quite early, at between 21:00 to 22:30, with some staying open until slightly later.

Vegetarians staying in Beijing are in for a treat, since almost all of the restaurants boast extensive menus with many different tasty vegetable dishes, often including tofu or similar. Noodles have become a staple part of the diet in Beijing and dishes containing noodles tend to outnumber rice dishes in this part of China.

Traditional Chinese restaurants in Beijing tend to serve meals containing stir-fries, chicken, freshwater fish and crispy Beijing duck (Peking duck), which is often served with pancakes, chopped spring onions and bean paste. If you are in a rush, dumplings (shuijiao) are a particularly cheap way to fill up. Chinese tea, beer or rice wine often accompany most meals in Beijing's many restaurants and you should always avoid drinking tap water.

Other types of cuisine are available in Beijing, with French, Italian, Japanese, Mexican, Thai and even North African restaurants being available, together with burger bar chains, familiar fast-food pizza outlets and American-style coffee shops.

Many tourists staying in Beijing still choose not to venture outside of their own hotel when it comes to eating out and hotels often offer good, all-inclusive packages. However, it would be a mistake not to sample some of the cuisine at local restaurants in Beijing, where the atmosphere is almost as important as the food itself. Many of the best dining venues are never far from the main attractions, being particularly concentrated around the city centre, the eastern district, in the Chao Yang area and around Dong Cheng.

For cheap eats in Beijing, the Food Court at the Oriental Plaza on Dongchang'an Jie is hard to beat and is home to a collection of eateries, each of which specialise in their own cuisine and style of cooking. The Wangfujing Snack Street off Wangfujing Dajie is also a good place for a quick meal, where you will find Muslim Uighur dishes, such as lamb kebabs.

A popular alternative to eating at more formal restaurants in Beijing are the endless selection of food stalls, which line many of the city's back streets and offer a rather memorable dining experience. With deep-fried dough sticks (yóutiáo) for breakfast, pancakes, spicy noodle soup or meat-filled bread for lunch, and baked sweet potatoes for tea, it is easy to live off this appealing food for your whole holiday, with the cooking smells wafting along the roads.

Some of Beijing's best restaurants line the Northeast Third Ring Road, where various international dishes are on offer. You will even find a Hard Rock Cafe in this part of the city, suiting those with a more limited palate. Chao Yang Park is also a lively spot for dining out and the trendy restaurants here are inexpensive and varied. For some of the most outstanding restaurants in Beijing, try those located in the main districts of Chongwen, South Chaoyang and Dongcheng, with the streets of Donghuamen Dajie, Dianmen Dongdajie, Gongti Donglu, Guanghua Dongli and Nanchizi Dajie all being good bets.