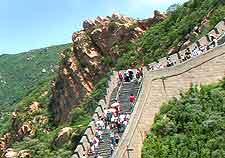 Visitors to Beijing will have to plan their sightseeing carefully as there is a lot to pack in here. The expansive city is home to some of China's most iconic tourist attractions, each deserving of a visit. At the centre of Beijing lies the Forbidden City, with its once-hidden charms bordered by Tiananmen Square, Mao Zedong Mausoleum, the Great Hall of the People and the Monument of the People's Heroes.

Stunning temples and palaces dot the city, many of significant historical importance, with the Temple of Heaven living up to its name. On the outskirts of Beijing is the Great Wall, one of China's most visited attractions and its biggest architectural achievement.

Tel: +86 010 6912 1235
Located to the north of the city, the Great Wall of China is one of the country's top tourist attractions and world's greatest architectural achievements, stretching from east to west for over 5,000 km / 3,100 miles. Construction of the wall began in the 7th century BC, when independent kingdoms took measures to protect their territories from wandering nomads. During the Qin Dynasty (221 BC to 207 BC), many sections of wall were connected, with development of the Great Wall continuing for several more centuries. The Great Wall is one of the most visited attractions in the whole of China and stretches from the Liaoning Province right up to Jiayùguan, which is part of the vast Gobi Desert. Also known as either 'The Long Wall of 10,000 Li' or simply 'Chángchéng', many visitors staying in Beijing head around 70 km / 44 miles to the Badáling stretch, which is believed to date back to the 14th century, during the Ming Dynasty. The scenery and views alone are worth the trip, as are the cable cars, the China Great Wall Museum and the Great Wall Circle Vision Theatre.
Open hours: daily, summer - 06:00 to 22:00, winter - 07:00 to 18:00
Admission: charge 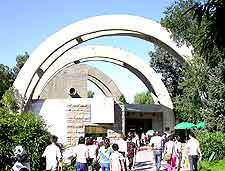 Address: No 131, Xi Zhi Men Wai Avenue, Haidian, Beijing, 100044, China, CN
Tel: +86 010 6831 4411
Established at the turn of the century, Beijing Zoo is housed at what was formerly an imperial manor in the Ming Dynasty. With a focus on animals native to China, the zoo offers the opportunity to get up close with exotic and rare animals not commonly see elsewhere. The pandas are the main attraction for many, while the gardens are also impressive.
Open hours: daily - 07:30 to 18:00
Admission: charge 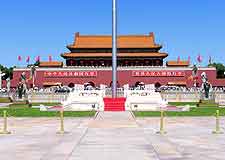 Address: North of Tiananmen Square, Dong Cheng, Beijing, 100009, China, CN
Tel: +86 010 6512 2255
Located right in the centre of the city to the north of Tiananmen Square, the Forbidden City was once the royal residence of the Ming (1368 to 1644) and Qing (1644 to 1911) dynasties. This expansive complex encompasses 9,000 rooms and dozens of structures. Since the 20th century, the palace has been used as a museum, allowing access what lies behind the high walls and moat. Visitors to Beijing's Forbidden City can admire the collection of almost one million artefacts, and also the beautiful royal garden.
Open hours: daily - 08:30 to 16:00
Admission: charge 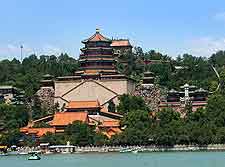 Address: Hai Dian, Beijing, Hebei, 100091, China, CN
Tel: +86 010 6288 1144
With World Heritage site status, the Summer Palace is a stunning example of ancient architecture. Located around 15 km / 9 miles from Tiananmen Square, the palace incorporates extensive gardens, amazing views and dozens of pavilions, towers and bridges. Constructed in the Qing Dynasty around 1750, the palace was later destroyed in 1860 during the Second Opium War, and was not restored until 1886. Now one of the best preserved landmarks from this period in China, this attraction is an absolute must-see.
Open hours: daily - 07:00 to 17:00
Admission: charge 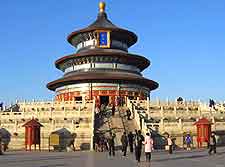 Address: Tian Tan North Road, Chong Wen, Beijing, 100050, China, CN
Tel: +86 010 6702 2242
The Temple of Heaven was once the prayer grounds of the emperors of the Ming and Qing dynasties. This impressive temple is without doubt one of Beijing's most distinctive places of worship, in keeping with its name. Built between 1406 and 1420 in the south of the city, visitors can explore the four main areas - Round Altar, Echo Wall, Vault of Heaven and the Hall of Prayer for Good Harvests, the latter whose outline is now the symbol of the city. The acoustics in the Hall of Prayer for Good Harvests are amazing, with even a whisper being heard throughout.
Open hours: daily - 06:00 to 21:00 (outer park), 08:00 to 18:00 (inner park)
Admission: charge 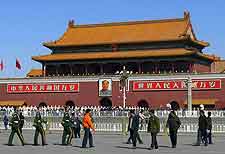 Address: Chang An Avenue, Dong Cheng, Beijing, 100006, China, CN
Ranking as the largest public square in the world, this historic expanse sits at the heart of the central Beijing, bordered by Tiananmen Gate, Mao Zedong Mausoleum, Forbidden City, Great Hall of the People and the Monument of the People's Heroes. Tiananmen Square's political and historical significance makes it an attraction not to be missed. From Tiananmen Gate, the views over the square are excellent, and a picture next to the huge Mao portrait is a highlight for many.
Open hours: daily - 24 hours
Admission: no charge