Getting Around, Columbia Travel, Transport and Car Rental 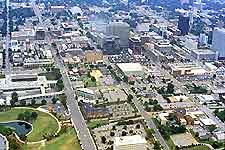 Columbia has the perfect location regards travel and transport, as it is set right in the center of South Carolina. Although fairly remote with regard to major cities, Columbia is well fed by interstate highways and even has its own, albeit small, airport, with a range of ground transport, including shuttles, bus travel and taxis.

The Columbia Metropolitan Airport is served by major airlines and has good access with downtown Columbia, while the major Interstate 95 is close by and linked directly to the city by I-20, providing fast travel. In addition, Columbia is also well served by Greyhound Lines coaches and Amtrak trains.

Columbia Metropolitan Airport is just outside the I-26 ring road and only a few miles southwest of downtown. It receives limited traffic from distant destinations, but is served by the likes of Continental Airlines, Delta and US Airways. Airport Boulevard, I-26 and Augusta Road run to downtown Columbia, with ground transport at the airport including shuttle buses and vans, taxis and regular public buses, which all travel to central Columbia. 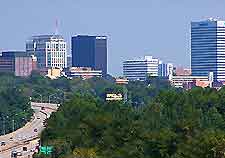 Columbia Metropolitan Airport has offices of major car rental transport companies, including Alamo, Avis, Budget, Hertz, and Thrifty. If you are driving to Columbia from out of town, three interstate highways converge on the city, two of which come from both directions. Interstate 20 provides travel from the northeast and connects Columbia with the New York-Miami I-95, continuing southwest out of the city on a heading for Atlanta. Interstate 26 comes in from the northwest, passing through Columbia and onto Charleston in the southeast, and I-77 comes in from Charlotte to the north.

Although making use of Greyhound Lines coaches is the cheapest travel option for getting to Columbia and away, long distance trips can be uncomfortable and time-consuming. Buses come in from all directions, with five buses per day alone arriving at Columbia from New York.

Columbia is also served by Amtrak trains, with three arrivals per day coming from New York, one of which is direct and the other two via Washington DC. Daily trains also travel from the south and from neighboring towns close to Columbia, such as Charlotte, throughout the day.