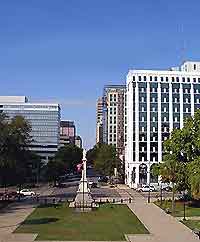 Located in the center of the southeastern state of South Carolina, Columbia boasts a 200-year history and comes with many interesting, friendly and historic neighborhoods, districts and locations. Columbia offers countless attractive and ancient buildings, both private and governmental, as well as some fantastic attractions.

The city of Columbia straddles the Congaree River, with downtown Columbia and the main districts lying east of it, including the historic districts of Elmwood Park and Old Shandon. Here are Columbia's most notable districts and regions.

The downtown district of Columbia follows the ubiquitous grid pattern, with streets running from southwest to northeast and northwest to southeast. Downtown Columbia is loaded with some striking buildings in a combination of wonderful architectural styles. Art and history are both well represented in Columbia's downtown district, with the city's premier art museum being one of the best in the state. 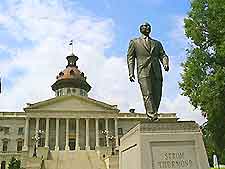 Elmwood Park is one of the Columbia's most desirable districts and is on the National Register of Historic Places. Located in the heart of Columbia, Elmwood Park is also one of the oldest areas of town, evidence of which can be seen in its restored old homes and big, ancient trees. The State Capitol and Governor's Mansion are in the area and shopping, dining and entertainment are in good supply.

Earlewood is one of the most pleasant areas in downtown Columbia and it is focused on the beautiful Earlewood Park. This older neighborhood features the historic Congaree Vista and the University of South Carolina, while the park covers a relatively huge area in downtown Columbia, with forests, rolling hills, valleys and a profusion of wild flowers. Earlewood Park is the largest park in Columbia and also contains an amphitheater, tennis courts, a golf course and two baseball fields.

The district of Eau Claire is known for its major shopping malls and is located to the north of downtown Columbia. Originally a small town unto itself, Eau Claire is now part of Columbia and boasts Columbia International University and Columbia College. Two nearby interstates provide fast access to the community.

Old Shandon is a local and national historic district and was joined with the city of Columbia in the early 1900s. The area is a delight for strolling and the sheer number of historic homes is breathtaking. Old Shandon is accessible by the Columbia trolley, providing east access for tourists and one of the reasons why the area built up so fast.