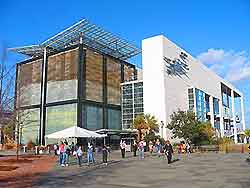 Full of traditional Southern charm and hospitality, Charleston is situated in the state of South Carolina (SC), in Charleston County, and is known for its outstanding architecture. With numerous antebellum houses and other notable colonial structures, Charleston's Historic District contains almost 1,500 significant buildings, many of which are listed on the National Register.

Charleston is home to countless charming streets full of history, guided walking and horse-drawn tours, a tropical climate, many pretty gardens and a host of tourist attractions, making Charleston a particularly compelling city. Found in 1670, Charleston also features a number of popular museums, housing fascinating information about the city's heritage, together with a scenic coastal location next to the Atlantic Ocean, nearby islands and beaches, including Folly Beach. 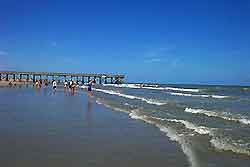 Hotels and bed and breakfast options are in plentiful supply in Charleston, particularly in the city center, in the French Quarter area and along the Waterfront, with many offering superb harbor views. Further hotels can be found next to Charleston Airport (CHS), which is just 12 miles / 19 km from the city. More information about Charleston Hotels.

Tourism has become an important part of life in Charleston and the city's main tourist information center is the Charleston Area Convention and Visitors Bureau (CACVB), which is situated on Meeting Street. Offering a range of indepth information about tourist attractions, what to do, where to eat and where to stay in Charleston, the visitors center also provides tourism information about things to do along the Waterfront, in the Historic District and around Mount Pleasant. 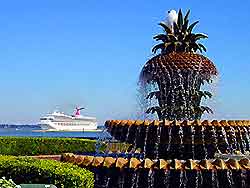 Other historic and notable tourist attractions in Charleston include Rainbow Row - a famous row of brightly painted houses, built in the mid-18th century and frequently photographed; Pineapple Fountain - one of the most famous landmarks in Charleston, symbolizing hospitality; Edmondston Alston House - an imposing mansion offering regular guided tours, constructed in the Federal style in the 1820s; Heyward Washington House - a house built in the 1770s, known for its traditional, period kitchen and interesting information about life in Charleston over 200 years ago; Aiken Rhett House - a beautiful mansion constructed in 1818, epitomizing antebellum life in Charleston; H.L. Hunley Confederate Submarine - sited offshore from Charleston, an important submarine that sank the USS Housatonic in 1864; and numerous parks and gardens, including Charleston's Charles Towne Landing, Isle of Palms County Park, Middleton Place, Wannamaker County Park and Waterfront Park. More information about Charleston Tourist Attractions and Charleston Landmarks.

Some of main museums and art galleries in Charleston include Charleston Museum - America's oldest museum, founded in 1773, full of historic information about the South Carolina coast; the Old Exchange and Provost Dungeon - a particularly significant Colonial building, once used as a prison before it became the City Hall in 1873; the Confederate Museum - inside the market Market Hall building in downtown Charleston, featuring authentic Charleston Confederate memorabilia; Karpeles Manuscript Museum - boasting many of the world's most important manuscripts, with fascinating information and displays, ranging from ancient Egypt to space exhibits; City Hall Gallery - containing an impressive collection of portraits and paintings by local Charleston artists; and the Pink House Gallery - housed in a particularly historic and colorful building, previously a sailor's tavern in the early 1700s. More information about Charleston Museums and Charleston Art Galleries.

Tourist attractions standing near to Charleston include Beachwalker Park - a truly picturesque spot away from busy Charleston life, with a secluded beach and a boardwalk offering scenic views; Boone Hall Plantation and Gardens - a tranquil setting with a grand mansion and landscaped gardens, featuring the famous Avenue of Oaks, planted more than 250 years ago; Cape Romain National Wildlife Refuge - a group of barrier islands and salt marshes close to Charleston, rich in native flora and fauna; Drayton Hall - America's oldest preserved plantation house, standing just a few miles to the northwest of Charleston city center; and Heron Park Nature Center - maintaining a delicate ecological balance with information about the area's wildlife. More information about Charleston Attractions Nearby.