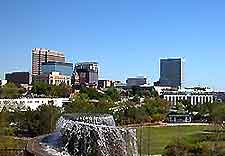 The city of Columbia is worthy of a visit and is located in the Palmetto State, in South Carolina (SC). Columbia is the state capital and home to many points of interest, including its highly regarded University of South Carolina, which dates back more than 200 years.

Set alongside the scenic Congaree River, other popular tourist draw cards in Columbia include the trendy Five Points district, where you will find numerous shops, restaurants and the city's impressive state museum. Columbia also features a number of historic red-brick buildings and a number of former mills, which once brought this city considerable wealth.

Tourism in Columbia and the surrounding area is actively promoted and the city's main tourist information center can be found along Lady Street. Amongst the information available at Columbia's tourism bureau are leaflets about tourist attractions, general travel advice, maps and helpful information about the city's historic guided tours, which are available through the Historic Columbia Foundation. 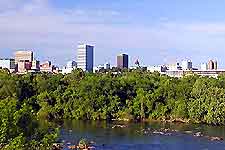 Hotels can be found throughout the city of Columbia, with many accommodation options centered around the vibrant downtown district, within walking distance of shops and restaurants. Other hotels can be found within the Eau Claire district, close to Columbia International University, along the banks of the Congaree River and around Columbia Metropolitan Airport (CAE), with lies to the southwest of the city center. More information about Columbia Hotels.

The state capital has many tourist attractions, museums and art galleries, including Congaree National Park - with some of the tallest trees in North American, plus hiking, bird watching, picnicking and kayaking; Riverbanks Zoo and Garden - breathtaking gardens and over 2,000 animals are featured in this fascinating Columbia zoo; St. Peter's Catholic Church - one of the city's exceptional landmarks; Columbia Museum of Art - featuring an array of well-known American and European art works; Sesquicentennial State Park - a popular and stunning park built during the Great Depression; and Tunnelvision - with three murals including a dynamic mural painted on the wall of the AgFirst Farm Credit Bank. More information about Columbia Tourist Attractions.