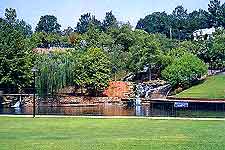 As would be expected with such an important historical town, Columbia has an abundance of tourist attractions and historical features.

One of the most popular tourist attractions in Columbia is the amazing art work that can be found in South Carolina's largest art museum.

Columbia is also known for its beautiful countryside, with the lush Riverbanks Zoo and Garden in town and the beautiful Congaree National Park being notable tourist attractions in their own right. Other major attractions and landmarks in town include St. Peter's Catholic Church and the curious 'Tunnelvision' murals.

Address: Main Street at Hampton, Downtown Columbia, South Carolina SC, USA
Tel: +1 803 799 2810
Located downtown, the Columbia Museum of Art is a comprehensive arts facility and the largest of its kind in the state. The museum features many famous works of American and European art by noted painters, including Monet, Botticelli, and Remington, as well as changing international exhibitions. In addition, the museum regularly holds concerts and children's programs, and there is also a shop on site.
Open hours: Tuesday to Saturday - 10:00 to 17:00, Sunday - 13:00 to 17:00
Admission: charge, first Saturday of each month free 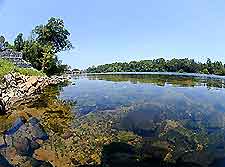 Address: 100 National Park Road, Hopkins, South Carolina SC, 29061, USA
Tel: +1 803 776 4996
Situated to the southeast of Columbia is the interesting Congaree National Park, with its forest of old-growth bottomland hardwood, one of only a few remaining in the US. Some of the trees in the park are among the tallest in the east of North America, with extremely lofty canopies. Apart from the trees, other attractions here include hiking, bird watching, kayaking, camping and picnicking.
Open hours: Monday to Friday - 08:30 to 17:00
Admission: free 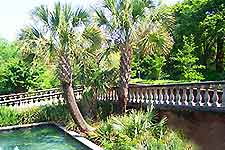 Address: 500 Wildlife Parkway, Greystone Boulevard, Columbia, South Carolina SC, USA
Tel: +1 803 779 8717
Columbia's Riverbanks Zoo and Garden is a brilliant 30 year-old collection of interesting animals and beautiful gardens, with more than 2,000 animals from all over the world. The river views are also outstanding and simply wandering about is a delight.
Open hours: daily - 09:00 to 17:00
Admission: charge

Address: 1529 Assembly Street, Columbia, South Carolina SC, 29201, USA
Tel: +1 803 779 0036
Originally built in 1824 and later destroyed by fire, the present day St. Peter's Catholic Church dates from the early 1900s and is one of the most fetching landmarks in Columbia. One notable soul buried in the churchyard is John Niersee, the architect of the State House.
Open hours: various mass times
Admission: free 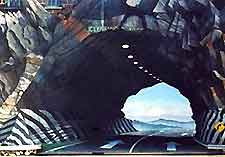 Address: Taylor and Marion Streets, Columbia, South Carolina SC, 29201, USA
Tunnelvision is a mural that was painted on the wall of the AgFirst Farm Credit Bank by artist Blue Sky in 1975. The mural depicts a highway going into a tunnel and is incredibly lifelike, while the brilliant sculpture 'Busted Plug Plaza' is on the other side of the bank. Another mural, 'Light at the end of the Tunnel,' is on Hampton Street to represent the other side of the tunnel. These three famous Columbia murals are a must for the photo album.
Open hours: daily - 24 hours
Admission: free

Address: 9564 Two Notch Road, Columbia, South Carolina SC, USA
Tel: +1 803 788 2706
The Sesquicentennial State Park is located in the Sandhills region of Columbia and features a 30-acre / 12-hectare lake amid its 1,419-acre / 568-hectare coverage. The park was built by the Civilian Conservation Corp. on orders of President Franklin D Roosevelt, to provide jobs during the Great Depression, subsequently improving conservation in the city. There are many notable attractions and original buildings in Columbia's Sesquicentennial State Park, including the 18th-century two-story log house, while picnicking is very popular with locals and visitors alike.
Open hours: daily - 08:00 to 18:00
Admission: charge