Columbia Weather, When to Go and Climate Information 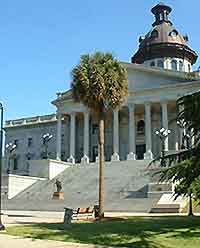 Columbia enjoys a moderate climate with four separate seasons. Summer weather in South Carolina is generally warm and sunny, although the winters are cool, with only occasional light snowfalls.

Columbia enjoys a subtropical climate with four separate seasons. The weather is hot and humid and has an average of almost 300 sunny days per year, making this state capital and understandably popular holiday destination.

Spring is warm with fairly heavy rainfalls. Temperatures can reach highs of around 23°C / 73°F during April and rarely drops below 14°C / 57°F.

Summers in Columbia are long, warm and sunny, with temperatures during June, July and August reaching 31°C / 88°F, and on occasion even higher. Rainfall can occur during the summer months.


Autumn is a pleasant season to visit, with plenty of warm days and temperatures can reach highs of 24°C / 75°F during October.

Winter temperatures remain fairly mild in Columbia but the occasional snow flurries can occur. The coldest month of the year is January, with daytime temperatures reaching highs of 13°C / 55°F, and dropping to 5°C / 41°F during the night.


The following are the normal daily temperature ranges for Columbia: