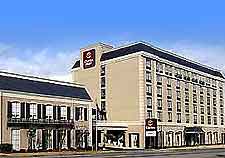 Columbia offers a variety of places to stay, with hotels and accommodation options located throughout the city. Advance reservations are frequently required during Columbia's high season, when the best lodging is in great demand. Hotels are also especially busy when home football matches are held and the annual spring graduation takes place.

Accommodation in the Columbia area is often greatly influenced by the city's numerous special events and festivals. Hotels are known to fill to capacity during the Three Rivers Music Festival in early April, the South Carolina State Fair in October, and again during the Chitlin' Strut Festival, which is staged each year on the weekend after Thanksgiving.

Downtown Columbia forms the very heart of the city and many of the most popular hotels are located here, in the hub of city life. Close to shops and restaurants, hotels located in downtown range from historic buildings to more modern multi-storey accommodation. The Eau Claire district is also home to a notable cluster of hotels, with many being conveniently close to both the Columbia International University and Columbia College campuses. 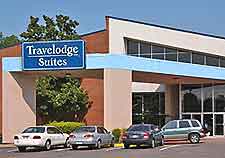 Further city hotels can be found nearby the Congaree River, Elmwood Park, Earlewood, around Five Points and within the national historic district of Old Shandon. A number of hotels are also situated in the suburbs of Columbia, and within the nearby South Carolina towns and cities of Blythewood (19 miles / 31 km), Cayce (4 miles / 6 km), Irmo (10 miles / 16 km) and Lexington (15 miles / 24 km).

A selection of chain motels can be found along the interstates just outside of Columbia, offering excellent value for money. Budget hotels in Columbia are also concentrated along the Forest Drive, the Horseshoe Drive, St. Andrews Road, the Sumter Highway and Two Notch Road, where accommodation includes the Baymont Inn, the Comfort Inn Fort Jackson, the Days Inn, the Howard Johnson, the Sleep Inn and the Super 8 Motel. Of note, look around exit 178 on Interstate I-24, where budget lodging is known to be especially plentiful. 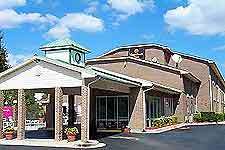 Mid-range hotels in Columbia can be found around Bush River Road, the Columbiana Drive, the East Exchange Boulevard, Garners Ferry Road, Hampton Street and the Stoneridge Drive. Particularly notable is the three-star Hilton Center Hotel on Senate Street, which is surrounded by the quality attractions within the entertainment and historic districts, such as the South Carolina State House, the Bicentennial Park and the University of South Carolina.

A number of reasonably priced hotels are also located within reach of the Columbia Metropolitan Airport (CAE), which stands on the southwesterly outskirts of the city, next to the suburbs of Springdale and South Congaree. These hotels are close to the Interstate I-26 and along the Airport Boulevard / Edmund Road, such as the Comfort Inn, the Sleep Inn and the Travelers Lodge.

Luxury accommodation is fairly scarce in Columbia, with some of the best being upmarket three-star hotels at the very top of their lodging category. On Main Street, the Sheraton Columbia Downtown Hotel ranks amongst the finest that the city has to offer and is located close to the Columbia Museum of Art.