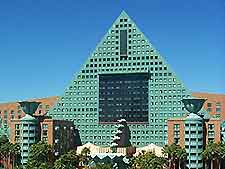 Without question one of America's most commercial and popular family oriented cities, Orlando comes with a wealth of accommodation to meet the heavy demand for seasonal lodging. Hotels in Orlando are widespread and number literally hundreds, with a sizeable percentage lining much of the famous International Drive. Of note, some cheap motels are based in nearby Kissimmee, where they are within easy reach of the famed Walt Disney World.

There are also a number of hotels close to the Orlando International Airport (MCO), which is just 7 miles / 11 km east of downtown and close to the suburb of Belle Isle. Actually located within the main terminal is the Hyatt Regency Orlando Airport Hotel, which stands on the Airport Boulevard and boasts almost 450 guest rooms. Within a mile of the airport and also worth considering is the Amerisuites on the Augusta National Drive, the Hampton Inn on the TG Lee Boulevard, and the Wingate by Wyndham on Hazeltine National Drive. 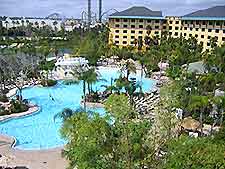 Budget accommodation is not overly difficult to find when planning Orlando holidays on the cheap, with a choice of two-star hotels providing good value for money. If you are looking to save money on lodging, then consider staying at the economy Travelodge Downtown Centreplex on North Magnolia Avenue, or at the Days Inn on the International Drive, which is both cheap and conveniently just a couple of blocks away from the SeaWorld attraction and the Orange County Convention Center (OCCC). Also located on the International Drive is the Rodeway Inn, while nearby and on Sandlake Road, the Comfort Inn is well-placed for trips to the Universal Studios. Cheap lodging in Orlando is also to be found in good supply on the Orange Blossom Trail.

Some of the most popular mid-range accommodation is situated on the Palm Parkway, the World Center Drive and of course, the International Drive, where there is a huge choice of three-star hotels and familiar chains. Standing on the International Drive are hotel brands such as Embassy Suites, Four Points by Sheraton, Hampton Inn and Suites, Homewood Suites, La Quinta Inn, Springhill Suites by Marriott, and Wyndham. 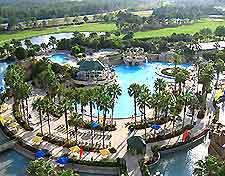 As you move up to four-star hotels, the standard of accommodation noticeably improves, although for many, the prices remain quite competitive. Within the Walt Disney World complex there are currently some 30 different lodging options suitable for families, with the four-star Walt Disney World Dolphin Resort being very notable and situated part-way between the Hollywood Studios and the Epcot attraction. Close to the exciting Magic Kingdom is the Wilderness Lodge, while at Disney's Animal Kingdom Lodge, you can expect views of giraffes and zebras out of your window.

Luxury hotels in Orlando are generally concentrated around Vineland Avenue, South Orange Avenue, the Central Florida Parkway, and again, the International Drive, where the Sheraton Studio City Hotel is a good upmarket choice. The JW Marriott Grande Lakes Hotel on the Central Florida Parkway is quite special and comes with some 200 hectares / 500 acres of tropical gardens.