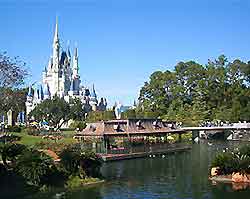 Orlando has a range of districts and locations to choose from, whether you are looking for somewhere to stay during your visit or simply wanting to explore Orlando on a day out. Walt Disney World and the districts and areas that surround it attract the most tourists in Orlando and are designed to provide visitors with everything they could possibly need.

Downtown Orlando offers an altogether different experience away from the tourist masses, with its pleasant neighborhoods and impressive developments.

Covering an unbelievable 47 square miles / 122 square kilometers , Walt Disney World qualifies as a district in its own right. With hotels, shopping centers, restaurants, golf courses, nightlife, four theme parks and two water parks, Orlando's Walt Disney World district is designed to provide holiday makers with a complete luxury living experience that necessitates no external influences. Naturally most holiday makers choose to leave the district in pursuit of Orlando's other attractions, but for those wishing to immerse themselves completely in the Disney experience there is a staggering array of attractions and amenities to choose from. 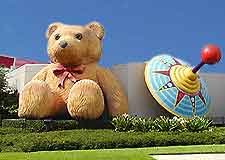 Visitors to Orlando who want to be situated right in among the action should find themselves somewhere to stay in the International Drive area. The title refers both to the long road lined with shopping malls, attractions, towering hotels and restaurants and its surrounding area. While the major theme parks in Orlando are situated elsewhere, International Drive district contains enough attractions of its own to keep you occupied 24 hours a day. One of the most unexpected sights along Orlando's International Drive is a giant teddy bear, which is made of concrete.

This district covers a long strip of highway between Kissimmee and Walt Disney World and is a favorite with budget conscious tourists visiting Orlando. The area is full of moderately priced hotels and motels, as well as dozens of inexpensive restaurants that cover all types of cuisine. There are also grocery stores, discount shopping malls and dinner show entertainment on offer. 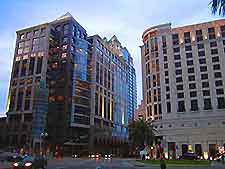 Orlando's downtown district is far from the tourist areas and is rarely spared a thought by holiday makers. However, it is a pleasant area which offers glimpses of quiet suburban Florida life in pretty, tree lined neighborhoods, as well as offering a reasonable array of shops, restaurants and entertainment areas. The Downtown district of Orlando is vast and can be broken down further into its own sub-districts which are recognized as Eola, Uptown, Parramore and the Central Business District (CBD).

This small but burgeoning district was created down to the last brick by the Disney Corporation, whose intense influence is notable throughout Orlando. Orlando's Celebration district consists of townhouses on a single crescent shaped street and Victorian style homes on a series of other perfectly designed streets. The 'town' has its own shopping, dining and entertainment area all conforming to Disney's vision of the perfect community.