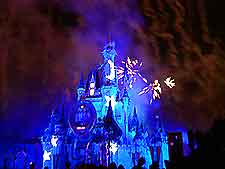 Orlando's calendar is packed with events and festivals that include all of America's most popular holidays, as well as others with more specific themes. Many of the events and festivals are hosted by Orlando's theme parks; although, events are not necessarily related in nature to the park where they are held. Calendar highlights include April's Fringe Festival and June's International Flower and Garden Festival. Independence Day is honored by most major theme parks in Orlando, with appropriate festivities and events on offer.