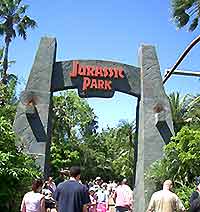 Orlando, in the sunshine state of Florida (FL), is one of America's best known tourist centers on account of its multitude of attractions. Home most famously to Walt Disney World, the Orlando area prides itself on providing a wonderfully exciting mix of tropical nature and thrilling manmade theme park attractions for tourists and visitors to Florida. With a number of designer outlet villages combined with excellent restaurants and a tourist infrastructure that's second to none, Orlando offers far more than just Mickey Mouse.

Address: 2641 South Lake Summit Drive, 540 Cypress Gardens Boulevard, Winter Haven, 33884, Florida FL, USA
Tel: +1 863 324 2111
Famous for being Florida's first ever theme park, Cypress Gardens is an impressive assembly of some of the world's greatest flora and fauna combined with over three dozen rides and an interesting selection of shows including ice skating and water skiing displays. When you have finished checking out the rides at Cypress Gardens, take the time to appreciate the stunning gardens that feature an array of both native plants and exotic species.
Open hours: daily - opens 10:00, closing time varies according to season
Admission: charge, discounts for seniors and children 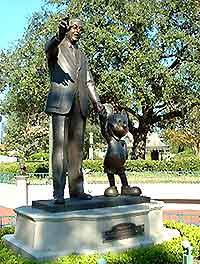 Address: 311 World Drive, Bay Lake, 32830, Florida FL, USA
Tel: +1 407 824 2222
Perhaps the most famous of the four parks that make up Disney World, Orlando's Magic Kingdom is a must for both the young and the old at heart. Be thrilled by the park's wealth of rides or sit back, relax and enjoy one of the many stage performances available throughout the day. With Mickey and friends in various places for photo opportunities and all attractions adhering strictly to the Disney theme, fans are guaranteed to love Disney's Magic Kingdom.
Open hours: daily - 09:00 to 23:00, seasonal variations may apply
Admission: charge (good for 24 hours), discounts for children

Address: Lake Buena Vista, 32830, Florida FL, USA
Tel: +1 407 824 4321
Disney's MGM Studios is a theme park that offers an unusual mix of behind the scenes studio tours with thrilling rides and live shows. Get to see first hand the workings of genuine fully functional live television and animation studios between experiencing the likes of The Twilight Zone Tower of Terror, Jim Henson's Muppet Vision 3-D and the Rock 'n' Roller Coaster starring Aerosmith. When you need time to sit down, there are live performances at Disney's MGM Studios in Orlando, featuring popular favorites such as Beauty and the Beast and the Voyage of the Little Mermaid.
Open hours: daily - 09:00 to 22:00, seasonal variations may apply
Admission: charge, discounts for children 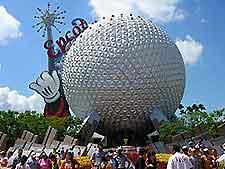 Address: Disney World Resort, Orlando, 32830, Florida FL, USA
Tel: +1 407 824 4321
Mickey's still around, but Epcot (which stands for Experimental Prototype Community of Tomorrow or 'every person comes out tired!) has less of a Disney theme and more of an educational edge. With fascinating rides, shows and interactive experiences Orlando's Epcot center introduces you to some of the world's most interesting aspects of science and culture. There are attractions aimed at both adults and children, so a family trip is a guaranteed fun day out.
Open hours: daily - 09:00 to 21:00, seasonal variations may apply
Admission: charge, discounts for children

Address: Walt Disney World Resort, Lake Buena Vista, 32830, Florida FL, USA
Tel: +1 407 824 4321
As the title suggests, this latest addition to Disney's Orlando-based attractions has a definite nature theme and features rides, stage shows and street entertainment based on animals that are both living and extinct. The Kilimanjaro Safaris is top of the rides list at Disney's Animal Kingdom, while the Festival of the Lion King appeals to all ages in its 30 minute Broadway style performance. Covering over 500 acres / 202 hectares in the Orlando area, Disney's Animal Kingdom is the largest of any of its parks in the world and has quickly become one of the major tourist attractions in Florida.
Open hours: daily - 09:00 to 18:00, seasonal variations may apply
Admission: charge, discounts for children

Taking up 120 acres / 49 hectares of Disney World's entire area, Downtown Disney is an evening-only complex with a vast array of shops and entertainment zones. Whether you fancy dining in the picturesque Rainforest Café, catching the world famous Cirque de Soleil show or simply relaxing in one of the many bars, you won't be short of something to do. Free entry to Orlando's Downtown Disney also makes this attraction an appealing option for an evening's entertainment.
Open hours: daily - 19:00 to 02:00
Admission: free 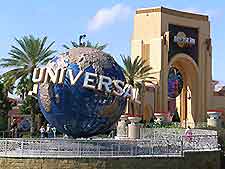 Address: 1000 Universal Studios Plaza, Orlando, 32819, Florida FL, USA
Tel: +1 407 363 8000
Combining the original theme park with the newer sister park 'Islands of Adventure', the Universal Studios experience is a refreshing break for those who have had their fill of Mickey and Disney World. The original park offers a wealth of rides and interactive shows based on some of Hollywood's favorite movies, while the sister park allows tourists to explore five unique islands, each with its own theme and experiences. As with all of Florida's theme parks, there's a good balance of attractions for both adults and kids.
Open hours: Monday, Wednesday to Sunday - 09:00 to 19:00, Tuesday 09.00 to 18.00
Admission: charge 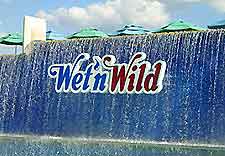 Address: 6200 International Drive, Orlando, 32819, Florida FL, USA
Tel: +1 407 351 1800
In spite of the many water parks that have sprung up around Orlando, many visitors maintain that Wet 'n' Wild is still the best. Situated just next to Universal Orlando, it offers adults the chance to relax on the lazy river while the kids go and check out attractions, such as 'the Storm', 'the Black Hole', 'Bubba Tub' and 'the Surge', not to mention the infamous 'Blast' which plunges its riders down a nearly vertical slide!
Open hours: variable depending on the season
Admission: charge, free for children under 3 and discounts for seniors 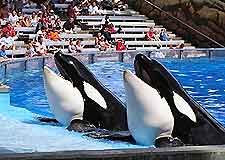 Address: 7007 SeaWorld Drive, Orlando, Florida FL, 32821
Tel: +1 800 327 2424
SeaWorld is the sister park of Busch Gardens and presents visitors with a vaguely similar formula of rides and nature-based attractions. Shows featuring sea mammals run in various parts of the park and regularly throughout the day, with the Shamu Killer Whale show perhaps considered SeaWorld's greatest and most famous attraction. Children can also enjoy feeding seals and petting dolphins, while braver visitors to SeaWorld can get close to the sharks via a sturdy cage that's lowered into their tank.
Open hours: daily - 09:00 to 22:00, seasonal variations may apply
Admission: charge