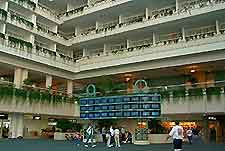 The theme-park capital of Orlando can be easily reached from all major international airports throughout the USA and the world. This busy Florida hub provides efficient service and excellent facilities, catering to the three million passengers who arrive and depart here each month.

Orlando International Airport (MCO) lies on the southeastern side of the city, next to the suburbs of Belle Isle, Boggy Creek, Edgewood and Meadow Woods, while nearby attractions come in the form of Lake Conway, Crescent Park and the Southport Community Park.

The airport began its life as an Air Force Base and started to operate commercial flights in a big way towards the end of the 1970s. Today, modern facilities cater to the steady influx of theme park visitors and family holiday makers headed to Disney World.

Orlando International Airport is home to five terminal buildings, Airside Terminals 1, 2, 3, 4 and the Main Terminal, with each terminal serving a number of major international airlines. The busiest of these include the likes of AirTran Airways, Delta Air Lines, JetBlue Airways, Southwest, United Airlines, US Airways and WestJet.

The center of Orlando is well signposted and the journey into the city will last around 30 minutes. Orlando International Airport features good connections to the highway network and roads that travel into the city include the Interstate I-4, Interstate I-95, State Road 408, State Road 417, State Road 436, State Road 528, the Beeline Expressway and the East / West Expressway. Many popular Florida cities, towns and suburbs are within driving distance of MCO, such as Apopka, Clearwater, Daytona Beach, Deltona, Kissimmee, Palm Bay, St. Petersburg, Spring Hill, Tampa and Titusville.

Orlando International Airport features numerous regular public buses, provided by the Lynx Bus Service. These buses travel from each of the terminal buildings into the downtown district, with this journey lasting approximately 40 minutes. Buses also connect a number of locations on the outskirts of Florida and run daily every hour, with notable destinations including International Drive, Kissimmee, Lake Buena Vista, Maitland, Walt Disney World and Winter Park.

Many hotels now also provide a door-to-door shuttle bus service, where guests can travel from the airport to their hotel at no cost. These include the Courtyard on Frontage Road, Hampton Inn and Holiday Inn on the T. G. Lee Boulevard, Hilton and Residence Inn on the Augusta National Drive, La Quinta Inn on both North Frontage Road and the Daetwyler Drive, and Quality Inn on McCoy Road.

Taxis are readily available at Orlando International Airport (MCO), being located outside the main terminal on level 1. Providing a convenient and simple way to travel into Orlando and many other suburban destinations, the journey to downtown hotels lasts approximately 25 minutes. The main taxi companies operating here include Ace Metro / Luxury Cabs, the Diamond Cab Company, Star Taxis, Town and Country Transportation and also Yellow City Cabs.