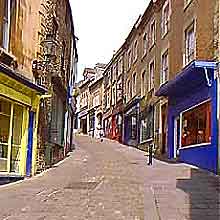 Although it's known that the Romans settled in the Frome area, the first evidence of a more permanent settlement on the site is said to date back to 685 AD.

The Bishop of Malmesbury, St. Adhelm, established a monastery and church here. He chose as his location a convenient crossing place over the River Frome, on the edge of Selwood Forest (formerly known as Sallow Willow Wood). The Forest was a popular hunting ground for many Saxon kings. It's for this reason that the town also used to be called Frome Selwood.

Frome grew up as a market town. Indeed, its market is thought to predate the arrival of the Normans in 1066. In 1239, King Henry III granted a Royal Charter that confirmed the town's right to hold a market. There is still some evidence of the former medieval street layout. Cheap Street and Apple Alley date back to this period, although many of the buildings that can be seen here today date from the Tudor era.


During the English Reformation of the 16th century, much of the land formerly owned by the church in Frome fell into the hands of the Thynne family, who later went on to build the nearby Longleat Estate. It may be at this point in the town's history that Frome acquired its mysterious tunnel system. Many people believe that the tunnels were built to allow persecuted priests to escape detection. Their exact origins and extent are, however, still unknown. 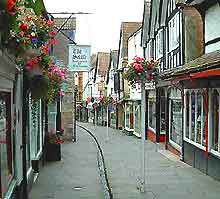 By the 17th century, Frome's cloth industry had turned it into a prosperous town. Many new developments date from this period, including the building of workers' town houses at Shepard's Barton and early industrial housing in the Trinity area. In 1667, a town bridge was added, remaining a rare example of a bridge that has buildings running along its length.

In 1685, Frome became caught up in the Monmouth Rebellion. The Duke of Monmouth passed through the town trying to raise an army against King James II. When the Rebellion failed, Frome became the site for a dozen executions.

In 1848, John Webb Singer cast his first pair of brass altar candlesticks, reputedly using turnips as moulds. Just three years later, he went on to exhibit at the Paris Industrial Exhibition. The Singer company was also famous for casting the statues of Boadicea and Lady Justice, both of which can be seen in London, as well as a huge statue of King Alfred that can be found in Winchester.

In 1871, it was decided that the town's market place was no longer large enough to accommodate the growing livestock market. Plans were made to move it to a large plot of land near the River Frome. In 1875, a new Market Hall was built here for the sale of cheese and grain. It even had its own railway siding, which could be used to transport cattle. 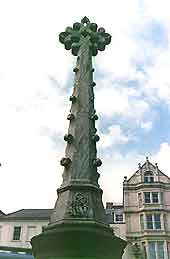 At the outbreak of World War One, the JW Singer company was requisitioned to make shell-cases and fuses in the Market Hall. After the war, the Market Hall was also used for occasional theatrical performances. The Memorial Theatre was built in 1925 in memory of those who fell during the war.

By the 1960s, Frome's cloth industry had disappeared completely. It was replaced by the printing industry and, in more recent years, a vibrant arts and crafts scene has sprung up in the town.

The Frome Festival has been held here every year since 2001. Although the town's livestock market was moved to its current out-of-town location in 1990 (in nearby Standerwick), a small twice-weekly market is still held in the town centre. The Market Hall has also been given a new lease of life - in 1998, the newly named Cheese and Grain opened for use. Today, many live events and markets are held here.