Getting Around, Frome Travel, Transport and Car Rental 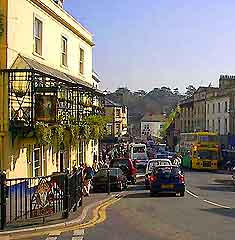 The town of Frome is well served by public transport system and has a regular bus service and a train station, with good connections throughout England.

Frome is situated nearby many other towns, cities and tourist attractions. Maps of the town are available from the Tourist Information Centre, in the Round Tower on Bridge Street.

Many visitors to this town also travel outside of the town, and renting a car is often the best method of transport, with many major roads and motorways situated close to Frome. Bath is located just 25 minutes from Frome by car and Bristol can be reached in around 45 minutes.

Frome is served by a number of airports, the closest and most convenient of which is Bristol Airport (BRS). London Airports, including London Heathrow Airport (LHR), London Gatwick Airport (LGW), London Stansted Airport (STN) and London City Airport (LCY) are also within easy travelling distance of Frome, by either train, coach or car.

Tel: +44 (0)117 9553231
Operated by First Badgerline, there are a number of bus stops throughout Frome and the town has a regular bus service. Buses and coaches also travel from Frome to nearby villages, towns and cities, including Bath, Bristol, Chippenham, London, Trowbridge, Warminster, Wells and Westbury.

Tel: +44 (0)8457 484950
Frome's train station was built in 1850 and was created by the school of Isambard Kingdom Brunel. Situated in the Wallbridge area of Frome, regular trains travel to Bath, Bristol, London, Westbury, Weymouth and Yeovil. Traveling by train is a particularly fast way to reach your destination and trains often run until around midnight.

Taxis in Frome are one of the most convenient ways to travel around the Frome area and are usually reasonably priced. They can be easily caught from the taxi rank outside of the Westway shopping precinct or at the train station in the Wallbridge area of town. Taxis can also be ordered by telephone and there are a number of reputable taxi firms that your hotel can recommend.