The residents of Frome like to party and there are many exciting events that are held throughout the year here. The popular events in Frome include numerous lively street fairs, carnivals, parades, festivals and numerous sporting events.

Many of the events in town draw enormous crowds of both participants and spectators, with the annual Frome Festival standing out and continuing to gain quite a reputation, year on year. Town newspapers often have details of the latest events being held in area. 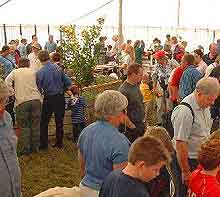 Frome Cheese and Agricultural Show
Address: West Woodlands Showground, near Frome, Somerset, England
The Frome Cheese and Agricultural Show is one of the most important events in town and has been held for over 120 years. The show is situated on the outskirts of Frome in mid-September, at the West Woodlands Showground, and includes cattle, cheese, crafts, dogs, entertainment, a large flower and horticultural tent, a food marquee, horses, music, poultry, sheep, many trade stands, craft stalls and numerous events throughout the day.

Frome Festival
The Frome Festival is an enormous event in the town of Frome and takes place every year during the first two weeks of July. With numerous events throughout the Frome Festival, attracting thousands of people to the town, highlights include live music at Marston House, concerts at the Cheese and Grain hall, musical events, a spectacular firework display, a celebrity auction, a series of children's workshops, film events - including screenings at Rook Lane Chapel, family treasure hunts, theatrical performances at the stunning ECOS amphitheatre and at the Merlin Theatre, dancing events, and the World Food Feast, which takes place in Frome town centre and offers free entertainment to the whole community.