If you were to name all of the famous buildings in England's capital city of London, it would certainly be a long list, with many of these landmarks being known the world over. Likely at the top would be Buckingham Palace, followed perhaps by Number 10 Downing Street, St. Paul's Cathedral and the Houses of Parliament, lining the north bank of the River Thames.

Standing high above the adjacent Houses of Parliament, the clock tower of Big Ben is another familiar sight in London, as is nearby Westminster Abbey. Further notable landmarks include Piccadilly Circus, Leicester Square and Trafalgar Square, which resides next to Charing Cross and is called home by towering Nelson's Column, as well as four huge bronze lions and two rather grand-looking fountains. For some evening entertainment, the theatres of the West End are close by, while the O2 Dome (formerly named the Millennium Dome) lies within the eastern suburb of Greenwich, where the concept of Greenwich Mean Time (GMT) was born. 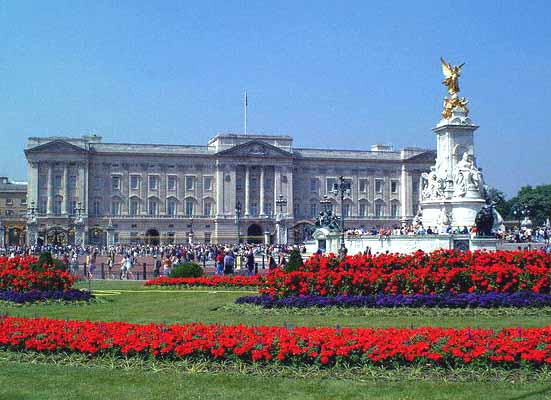 Address: Buckingham Palace Road, The Mall, London, SW1 1AA, England
Tel: +44 (0)20 7321 2233
Residence of the British Monarch, Buckingham Palace began its life in 1705, being constructed for the Duke of Buckingham as a grand townhouse. King George II acquired the building in the 1760s and during the 19th century, the structure was greatly extended, being centred around a courtyard. Queen Victoria was the first monarch to call the palace her home and today, the grand state rooms are still used for official functions and entertaining. In 1911, the Victoria Memorial was built outside of the main gates, following the death of Queen Victoria in 1901. Today, the palace is opened to the general public for much of August and September.

Address: St. Paul's Churchyard, London, EC4M 8AD, England
Tel: +44 (0)20 7246 8348
There is no denying that St. Paul's Cathedral is a spectacular cathedral and one of Sir Christopher Wren's most breathtaking creations. Constructed between 1675 and 1708, after the old church was destroyed during the Great Fire of London in 1666, St. Paul's looks extremely grand from the outside, but don't be tempted to walk on by. Step inside to enjoy its further grandeur and view the enormous dome from underneath, and be sure to head up the 259 steps to reach the circular Whispering Gallery. The dome itself is of epic proportions, being some 34 metres / 112 feet in diameter and clearly visible on the London skyline. 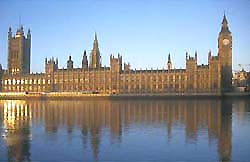 Address: Westminster, London, SW1A OAA, England
Also known as the Palace of Westminster, the Houses of Parliament can be found standing next to Westminster Bridge. Built during the Middle Ages and then subsequently rebuilt between 1840 and 1870, following significant fire damage, this palatial structure comprises both the House of Commons and the House of Lords. In 1605, the Gunpowder Plot was led by a group of English Catholics, including Guy Fawkes, who were unsuccessful in their attempt to blow up the House of Lords and assassinate King James I during a State Opening ceremony.

Address: Parliament Square, London, SW1A 2NE, England
Gracing the Houses of Parliament and fronting the River Thames, Big Ben is a towering clock and without question one of the most famous of all London's many landmarks. This iconic clock tower is actually the world's third-tallest freestanding structure of its kind and was built in 1858, being named after its 13-tonne bell which rings out across the city each hour, on the hour. Big Ben is so well-known that it regularly appears in films and television dramas, which in the past have included The Thirty Nine Steps, Thunderball (the fourth James Bond movie) and Peter Pan, and more recently, BBC's Doctor Who.

Address: 20 Dean's Yard, Westminster, London, SW1P 3PA, England
Tel: +44 (0)20 7222 7110
Sandwiched by Victoria Street and Abingdon Street is Westminster Abbey, one of the finest Gothic buildings on the planet. Built in the middle of the 13th century at the request of King Henry II, the abbey was constructed on the site of an older 11th-century church and designated as a UNESCO World Heritage Site in 1987. Over the centuries, Westminster Abbey has witnessed some of the greatest events in English history, including coronations, Royal marriages and state funerals. On April 29th 2011, Prince William and Catherine Middleton were married here and this lavish ceremony was screened all over the world, being watched by an estimated three billion people.

Address: Trafalgar Square, London, WC2N 4JJ, England
Situated at the end of both Whitehall and The Mall, Trafalgar Square functions as an important public space and is surrounded by some of London's most well-known landmarks, such as the National Portrait Gallery. The square was designed in the 1820s by acclaimed British architect John Nash, to honour the victorious Battle of Trafalgar in 1805, led by Admiral Horatio Nelson. To pay tribute to Nelson, who sadly lost his life in this historic battle, a tall monument to the admiral was erected in 1843, being named Nelson's Column and towering for just over 50 metres / 164 feet. The base of the column is guarded by four giant bronze lions, while either side are two sizeable fountains, where New Year's Eve revellers are known to go for a paddle as Big Ben strikes midnight.

Centrally located Piccadilly Circus really does form the very heart of London and lies at the end of Regent Street, next to Shaftesbury Avenue and its renowned West End theatres. Although the Piccadilly Circus of today dates back to the early part of the 19th century, the area has been central to life in the city for many centuries, being named after the ruffs once worn by the sharp-dressing locals, better known as 'pickadills'. The illuminated curving billboards are a distinctive sight here, with advertising hoardings first erected in the early 20th century, being quite different from the state-of-the-art technology employed by the current LED video screens.

Address: Downing Street, London, England
Standing close to St. James's Park, 10 Downing Street certainly ranks amongst the world's most famous addresses and this terraced house serves as the official residence of the Prime Minister, as well as being the government headquarters. Whilst this important townhouse may be much larger than it actually appears from the front, it was erected rather cheaply, being designed by Sir Christopher Wren for Sir George Downing and built between the years of 1682 and 1684. Various techniques were employed to reduce costs, such as poor foundations and rendered facades, painted with lines to imitate brickwork. In 1732, King George II decreed that 10 Downing Street should become the residence of the first Prime Minister, Sir Robert Walpole, and this tradition has continued ever since. Following an unsuccessful mortar attack in 1991, the street is now closed off to members of the public, with retractable barriers and constant security in place.

Address: Bugsby Way / Peninsula Square, Greenwich, London, SE10 0GD, England
The circular Millennium Dome was completed in 1999 and officially opened on January 1st 2000, being built at the cost of almost £800 million. Located on the Greenwich Peninsula, on the eastern side of London and next to the waterfront, this giant white dome is actually the biggest of its kind in existence, being roughly 365 metres / 1,200 feet in diameter and supported by 12 yellow slender towers measuring in at some 100 metres / 328 feet in height. Built on reclaimed wasteland, this landmark was originally divided into a series of themed attractions, although due to poor visitor numbers and financial problems, it was initially closed at the end of the first year. In the spring of 2005, the Millennium Dome changed hands and was renamed as 'The O2', becoming a successful entertainment venue with an enormous indoor arena. Since reopening in 2007, many top artists have performed here to crowds of up to 23,000, including the likes of Beyoncé, Bon Jovi, Britney Spears, Elton John, Justin Bieber, Lady Gaga, Rihanna and Whitney Houston, amongst many others. In 2009, Michael Jackson was preparing to staged his 'This Is It' concerts here, shortly before his untimely death.