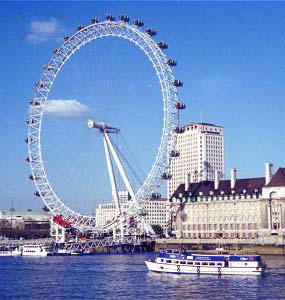 The British Airways London Eye is now considered the capital's top tourist attraction and is the highest observation wheel in the world. Its 30-minute flight is slow and gives unrivalled panoramic views over central London and beyond. On a particularly clear day you can see across seven different counties and even Windsor castle, some 25 miles / 40 km away. It stands at 135 metres / 442 feet high above the South Bank of the River Thames, between Waterloo and Westminster Bridges, opposite Big Ben and the Houses of Parliament.

Complete with high-tech fully enclosed steel and glass capsules, The London Eye is one of the most visually striking structures in the world - offering a new perspective on London's magnificent skyline. It was first conceived as much more than a landmark or attraction - a symbol of technological and design excellence in the new millennium, providing a focus for new development within its area of London. It has contributed considerably to the regeneration of the communities and businesses that surround it.


Visit the Eye after dark and you will enjoy spectacular views of London with stunning buildings such as the Houses of Parliament, St. Paul's Cathedral, Battersea Power Station and the Oxo Tower lit up. Alternatively, visit at sunset and see the skyline awash with vibrant colours as the city's lights come on during your flight.

The London Eye in-flight mini guide is available to purchase, providing a handy pocket-sized guide to this capital city, in a pull-out format. The guide gives panoramic maps from each direction of the capsule, labelling the main landmarks. Combined river cruises and flight packages are also available.