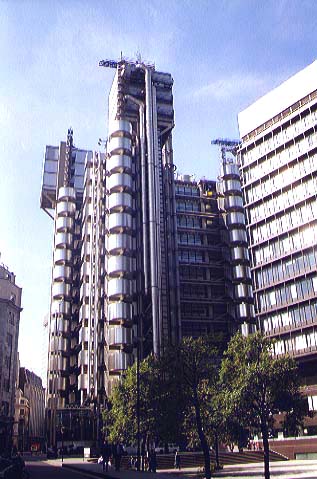 Bank is the finest architectural arena in the city, heart of the finance sector and the busy meeting point of eight streets. It is overlooked by a handsome collection of neoclassical buildings, among them the Bank of England, the Royal Exchange and Mansion House - each one faced in Portland stone.

This concentrated financial centre is often referred to as the 'Square Mile'. Today all the key money markets and the city's 500 foreign banks continue to be centred around Bank.

By virtue of its position between New York and Tokyo, and the employment of a highly skilled workforce whose native tongue is the international language of finance, the city has remained at the top of the world's money markets. London's finance sector employs over 150,000 people in the city and dominates the European foreign-exchange markets, leading the world in futures and options.

Established by William III to raise funds for his costly war against France, the Bank of England, nicknamed the 'Grand Old Lady of Threadneedle Street' wasn't erected on its present site until 1734. Occupying a vast 3.5-acre island site, the outer curtain wall is windowless. The museum has its entrance on Bartholemew Lane and traces the history of the bank, including specimens of every note ever issued by the bank over the centuries.
Open hours: Monday to Friday - 10:00 to 17:00
Nearest tube station: Bank

The modern Stock Exchange is a short way up Threadneedle Street from Bank. Its public gallery has been closed to the public, although the human 'scrum' of dealers has now been largely replaced by computerised dealing.
Nearest tube station: Bank

This graceful building was twice destroyed by fire since it was first built in 1570. The current building is fronted by a massive eight-column portico and a very convenient set of steps for lunching office workers, was built in the 1840s by Sir Edward Tite. Guided tours can be arranged by phoning the building's curator in advance.

This is the Lord Mayor's splendid classical lodgings during his or - on only one occasion so far - her term of office. It is also open to group tours. To join a group tour you will need to phone several months in advance and then confirm in writing.

A brief and friendly handshake is usually the customary greeting. New acquaintances are usually addressed on first name terms.

In general, most offices will operate between the hours of 09:00 and 17:30, Monday to Friday, although business hours do vary from one industry to another. Most London banks open between 09:00 to 17:00 Monday to Friday and larger branches may also open on Saturday mornings. For business meetings, both men and women wear suits, although the British often adopt an informal, yet presentable dress code.

Some restaurants now operate a strict 'no smoking' policy, although many do cater for smokers in separate areas. Most offices in London are now 'non smoking' and even though the British have a fairly relaxed attitude to smoking, it is sensible to only smoke when in the company of other like-minded people.