Copenhagen Weather, When to Go and Climate Information 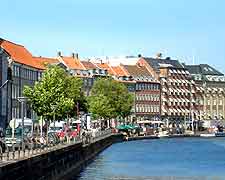 The temperate climate of Copenhagen means that the city enjoys fairly predictable warm Danish summers and mild winter weather. During the winter months, the climate is regulated by the Atlantic Gulf Stream, which ensures that the temperatures never get too low and at nighttime hover around zero (0°C / 32°F).

Rainy weather is not uncommon in Copenhagen, whatever the time of the year. However, grey skies and clouds are more likely during the winter, when snow and overnight frosts can even be a possibility, especially between January and February. 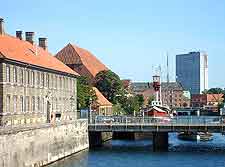 The winter climate in Copenhagen is at its coldest in February, when average daytime temperatures rarely exceed 2°C / 36°F. By April, the increased light levels and plentiful sunshine heralds the start of spring and temperatures quickly soar to 12°C / 54°F or more. For this reason, mid-spring is becoming an increasingly popular time to visit this city, when the weather is favourable, the streets fairly quiet, and Copenhagen's tourist season is just starting.

July is Copenhagen's hottest month and this time is when you are most likely to experience a Danish heat wave and extremely long daylight hours. Whilst the summer climate generally features temperatures of 21°C / 70°F, it is possible to occasionally experience highs of 30°C / 86°F. However, since temperatures rarely get this high, many hotels and public spaces are not air-conditioned. Rainy weather in Copenhagen is typical of north Europe and is generally spread quite evenly over the year and not usually excessive.