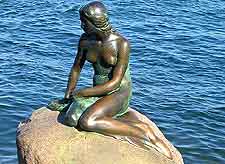 Loaded with exceptional passenger facilities, Copenhagen Airport is the international air hub for the Danish capital, the Oresund region and the whole of Denmark. Located on Amager Island, some 8 km / 5 miles to the south of Copenhagen's central district, the facility now handles almost 23 million passengers per annum, a record high. The airport supports flights to over 130 destinations in just under 50 different countries, as well as flights to numerous domestic cities.

Copenhagen Airport is a hub for some ten carriers, including Scandinavian Airlines, Norwegian Air Shuttle and Thomas Cook Airlines. Founded in 1925, the airfield opened its first hard-surface runway in 1941, heralding the expansion after WWII to become one of Europe's largest air facilities. Four terminals are found here, with Terminal 1 handling domestic flights and Terminals 2 and 3 handling Schengen and non-Schengen international flights. A newly built replacement for Terminal 4 is at the planning stage.

The CPH Go terminal opened in late 2010 and is used solely for budget airlines, with EasyJet being the only carrier operating here at present. One of the airport's strongest points is its excellent onward transportation network. The onsite 24-hour metro station and the Terminal 3 railway station both offer direct access to the city centre, while buses and taxis are also available.

Address: Lufthavnboulevarden 6, DK 2770, Kastrup, Denmark
Tel: +45 3231 3231
Copenhagen Airport's island location, close to the Oresund Bridge which joins Denmark and Sweden, is partly in Kastrup town's Tamby municipality and partly in adjacent Dreger. The Swedish city of Malmo, on the mainland, is some 24 km / 15 miles to the east, with access to and from Amager Island and the airport via train or the Oresund Road Bridge.

The trip to Copenhagen is normally quick by car, as the direct, well-signposted E20 road bypasses the airport en route to the city centre. However, traffic on all of Copenhagen's expressways and fast roads can become congested during rush hours.

A free shuttle bus departs every 15 minutes during the day and every 20 minutes at night from the airport, running into the city centre. Municipal bus number 5A travels to the Copenhagen Central Station and the city centre, and longer-distance buses run to Sweden and rural Denmark with Eurolines and Swebusexpress.

Copenhagen Airport boasts a metro station and an overground railway station on the complex. The overground station is housed within Terminal 3 and is linked to Terminal 1 by a shuttle bus. Trains from the airport station take travellers to the Copenhagen Central Station. Passengers will find that the metro station is situated adjacent to Terminal 3, with services operating day and night, and taking just 15 minutes to reach the city centre.

Taxi ranks are provided outside Terminals 1 and 3, close to the Arrivals exits. Those looking for a taxi into Sweden will find a dedicated rank alongside Terminal 3, while most Danish taxis will also happily accept this fare.