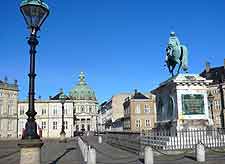 Whether it is shopping around the traffic-free Stroget, terrace dining at the Grabrodretorv Square (Grabrodre Torv) or ballet at the Royal Danish Theatre on the Kongens Nytorv, the city of Copenhagen has plenty to offer. Surrounded by a series of appealing and historical neighbourhoods, the downtown district of Copenhagen goes by many different names, such as the Inner City or the district of Indre By.

The island of Frederiksberg is actually an individual city with a population of around 100,000 people. However, since it is so close to Copenhagen itself, Frederiksberg is generally considered to be a suburb or district. Leave time to check out Frederiksberg and its plentiful green spaces, the many ethnic eateries within Norrebro, and the Parken Stadium in Osterbro. 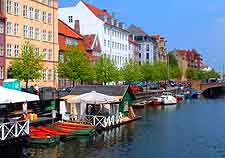 Steeped in Danish history, the district of Christianshavn is known to have been laid out during the beginning of the 18th century and has grown up around an extensive network of city canals, where canal tours are readily available. Founded in the early 1970s, the Freetown of Christiania is a self-governing location within Christianshavn and mainly residential. Some things that you should definitely make time to do here are visit the actual Christianshavn Harbour, climb to the top of the Vor Frelsers Kirke spire, or spend time gambling at the casinos within the Hotel Scandinavia on the Amager Boulevard.

A much-visited town on the island of Zealand and close to Copenhagen, Frederiksberg is filled with attractions suiting all ages and is so close that most consider it to be a suburb of the city proper. Frederiksberg Town Hall is fairly imposing and was built between 1942 and 1953, while for sheer grandeur and opulence, the Frederiksberg Palace (Frederiksberg Slot) is quite unbeatable. Constructed in the early part of the 18th century, Frederiksberg Palace is equally impressive inside, with plenty of marble, colourful ceiling paintings and large portraits. Many fountains, grottoes, pavilions and temples can be found in the surrounding formal gardens. Frederiksberg also boasts a wealth of parks and green spaces, along with many wide boulevards and theatres, which are clustered along the Frederiksberg Allé. Within the Frederiksberg Have, Copenhagen Zoo is a must-see and was established in 1859, perhaps being best known for its eye-catching watch tower, which is almost 45 metres / 148 feet high.

The district of Holmen has been an important naval base in Copenhagen since the early 16th century and over the years has been enlarged, with the addition of a number of artificial islands. Many of the top attractions here are based around the waterfront itself and include angling, kayaking, boat trips and even diving. Numerous musical events regularly take place at the new Opera House, along the Ekvipagemestervej. 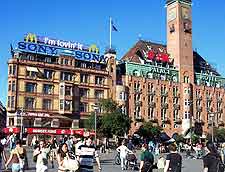 The very historical core of the city, Indre By contains many striking landmarks, such as the Royal Castle (Amalienborg) on the Amalienborgs Slotsplads, the Royal Library on the Soren Kierkegaards Plads, and the City Hall (Radhuset) on Radhuspladsen, where guided tours of the main building allow you to view the hall's many paintings and frescoes. Tourists also often choose to visit the King's Garden (Kongens Have) on the Gothersgade, or simply enjoy a cruise along the canal.

There are a number of memorable sights around Kastellet district, with the star-shaped Frederikshavn Citadel (Kastellet) itself being of great importance to Copenhagen's history, dating back as far as 1626. Also of local significance is the iconic Little Mermaid Station, which stands on the northerly side of the waterfront. If you have time, make sure that you walk on the walls surrounding the Kastellet itself.

This traditional Danish neighbourhood still retains its strong world-class roots and has very little to offer tourists. However, the eye-catching Grundtvigskirken church is worth looking out for, and the Utterslev Mose park is a pleasant mixture of cycle lanes, streams, lakes and pathways.

A lively spot based around the thoroughfare of Norrebrogade, the Norrebro contains a significant student population and multiethnic community. A substantial number of eateries are located along the Norrebrogade, many of which sell 'schawarmas' (Middle Eastern-style lamb or chicken sandwiches). The Assistens Cemetery is another definite highlight in this part of Copenhagen and is close to the Kaptelvej and Jagtvej. This cemetery also functions as an important park and is home to the graves of many famous Danish individuals, such as Hans Christian Anderson himself.

The biggest of the city's many districts, Osterbro is a fairly quaint and cosy neighbourhood. The Parken Stadium (Copenhagen National Stadium) is a major attraction within Osterbro and with a capacity for more than 42,500 spectators, regularly hosts many important football matches. Boasting a modern retractable roof, the Parken is home to both the FC Copenhagen and the Danish National Football Team, and is also a leading concert venue, where the Eurovision Song Contest was hosted in 2001.

Situated on the very outskirts of central Copenhagen and to the west of the Indre By district, Vesterbro is named after its historic Western Gate. Although this is a particularly trendy neighbourhood, Vesterbro does contain a number of rather run-down hotels and adult shops. The Istedgade is the main thoroughfare and lined with many shops, while to the east, the Copenhagen Central Station is just a short walk away.