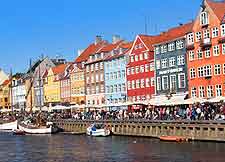 All budgets are well catered for at Copenhagen's many restaurants. When dining out, you will often encounter a blend of Danish and Asian dishes, particularly at one of the many trendy cafes in Copenhagen city centre.

A popular alternative to restaurants and formal dining are the city's traditional Danish pubs, where hearty 'meat and potatoes' food is filling, tasty and cheap. However, if you are looking for something a little fancier, many international restaurants offer flavours from Italy, Mexico, the Middle-East and more.

When dining out at a traditional Danish restaurant in Copenhagen, you can expect to enjoy many regional specialities and Scandinavian-style dishes, most of which are generally meat or fish based, with favourites including cod (torsk), eel (al), herring (sild) and salmon (laks).

Due to the long winters in Copenhagen and throughout Denmark, many of the foods were either smoked or pickled, and this tradition lives on. Roasted pork and chicken tend to feature much more extensively on restaurant menus than beef, and ground pork is a major ingredient of many dishes. Of course at breakfast time, what better way to start the day than with some famous Danish bacon. 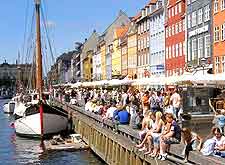 A large number of fast-food restaurants are concentrated around the Central Station and inside the station's very own food court (Gourmet Marked) contains a number of eateries with a definite deli theme. Within the Tivoli area of Copenhagen, more than 30 different restaurants vie for your business. Nearby and around Stoget, a wealth of cheap eats await, including open sandwiches (smorrebrod) and hotdogs on the famous Danish sausage wagons (polsevogns).

Close to Copenhagen's Stoget and the Latin Quarter, Greyfriars' Square (Grabrodre Torv) features several quality restaurants, which are based around an attractive cobbled square. Home to a mixture of immigrants and students, the Norrebrogade area of Copenhagen features a wide choice of dining options, offering both Danish and international cuisines. If you are dining out during the sunny summer months, then head to Nyhavn and enjoy a meal next to the Nyhavn canal itself, at one of its countless pavement cafes.