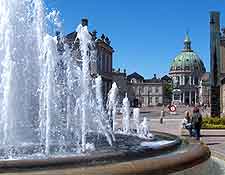 There are many wonderful monuments, buildings and landmarks to be found around Copenhagen, such as the three sea forts of Flakfortet, Middelgrundsfortet and Trekroner, which lie at the very harbour entrance. In recent years, many of the fortresses in Copenhagen have been beautiful restored, while others remain in a lesser state.

The glorious Copenhagen Stock Exchange building (Borsen) is amongst the city's oldest and most prominent landmarks and dates back around 400 years, when it was used as a meeting place, market and warehouse. No visit can be considered completed without taking a photograph of the most famous and photographed landmarks in the whole of Denmark, the Den Lille Havfrue, a much-loved statue of the Little Mermaid who enjoys a harbourside setting. 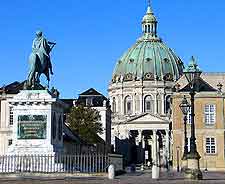 Address: Amalienborgs Slotsplads, Copenhagen, DK-1257, Denmark, DK
Tel: +45 03 392 6451
The winter residence of the Danish monarchy, Amalienborg comprises a total of four separate palaces, surrounding a spacious plaza and appearing almost as neighbouring stately mansions. Each of these palaces (Brockdorfske, Levetzaus, Moltkes and Schackske) are equally impressive landmarks and they all date from the mid-18th century, being adopted by the Denmark's royal family in 1794, after their present home of Christiansborg Castle was badly damaged by fire. The Copenhagen Frederikskirken stands close by and this beautiful Baroque church is famous for being constructed almost entirely out of marble.
Open hours: Monday, Tuesday and Thursday 10:00 to 17:00, Wednesday - 10:00 to 18:00, Friday to Sunday 12:00 to 17:00
Admission: charge 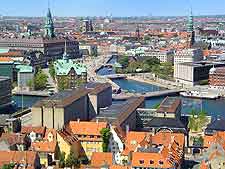 Address: Christiansborg Slotsplads, Copenhagen, DK-1218, Denmark, DK
Tel: +45 03 395 0500
Actually being built directly above the water and surrounded almost entirely by canals, the Stock Exchange boasts a tall and ornately decorated spire, with three crowns representing the prominent Scandinavian countries of Denmark, Sweden and also Norway. The building itself became Denmark's stock exchange during the latter part of the 19th century, when the city's financial scene was burgeoning.
Open hours: Monday to Thursday - 08:15 to 17:00, Friday - 08:15 to 16:15
Admission: charge 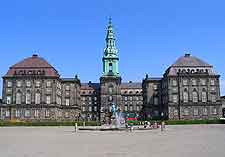 Address: Christiansborgs Slotsplads, Copenhagen, DK-1218, Denmark, DK
Tel: +45 03 392 6492
Christiansborg Castle has long been an extremely significant landmark in Copenhagen and is currently home to the Supreme Court and the Danish parliament. The actual architecture of the palace has been influenced by a number of different styles, since it has been remodelled twice over the years following substantial fire damage at the end of both the 18th and 19th centuries. Enjoying a waterfront position and on Christiansborg Square itself, the palace is a very symmetrical building, with a tall spire of more than 100 metres / 328 feet being the centrepiece.
Open hours: hours vary
Admission: charge 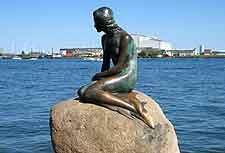 Address: Langelinie, Copenhagen, DK-1263, Denmark, DK
The Little Mermaid is a character known all around the world and featured in one of the main fairytales from Danish legend Hans Christian Andersen, being later made into a blockbuster Disney animation. The statue itself sits upon a rock within the harbour at Churchill Park and was installed in its current positions around 100 years ago.
Open hours: daily - 24 hours
Admission: free

Address: Noer Langelinies, Copenhagen, DK-2100, Denmark, DK
Tel: : +45 3311 2233
The Kastellet is located in close proximity to Langelinie and is a historic fortress, arranged in a star shape. Erected during the middle of the 17th century, the Kastellet has been well preserved and boasts exceptions views across the harbour and the city itself. You are able to freely explore much of the fortress and enjoy its many military treasures.
Open hours: daily
Admission: charge 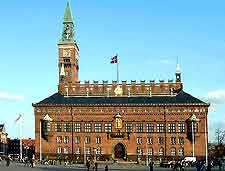 Address: Radhuspladsen 1, Copenhagen, DK-1608, Denmark, DK
Tel: +45 03 366 3366
Copenhagen City Hall is a famous landmark in Denmark and presides over the Town Hall Square itself, known locally as the Radhuspladsen. Completed in September of 1905 and dominated by its tall clock tower, which measures over 105 metres / 345 feet high, the Town Hall is known to have been actually inspired by the town hall located within Siena, Italy. Inside, look out for the Verdensur (Jens Olsen's World Clock) a historic astronomical clock containing more than 14,000 actual parts.
Open hours: Saturday - 10:00 to 15:00
Admission: free

Address: Norregade 10, Copenhagen, DK-1017, Denmark, DK
Tel: +45 03 532 2626
Established towards the end of the 15th century and today accommodating almost 35,000 students and some 9,000 staff, the main campus of the Copenhagen University lies alongside the Stroget shopping district, while other university buildings are spread across the city. This is the main building and dates from the 1830s. Although the majority of courses taught here are in Danish, and increasing number are now being offered in English.
Open hours: daily
Admission: free 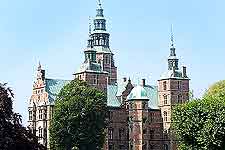 Address: Ostervoldgade 4, Copenhagen, DK-1350, Denmark, DK
Tel: +45 03 315 3286
Located in the centre of Copenhagen, the Royal Castle dates back to the 1630s, when it was finally completed after almost 30 years of construction. Modelled with a traditional Renaissance-style façade and housing the priceless Danish crown jewels, the Rosenborg Slot is an important local landmark and is surrounded by large moats and particularly beautiful formal gardens. If you are visiting during the summer, be sure to check out the fragrant and colourful rose gardens, which will likely be in full bloom.
Open hours: Tuesday to Sunday - 11:00 to 14:00
Admission: charge, discounts for children, students and seniors