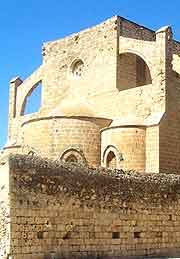 There are a number of spectacular Cypriot ruins, landmarks and Roman baths to be found within Famagusta, as well as some impressive monuments, royal tombs, monasteries, churches and mosques.

The best of these local landmarks include the Othello's Tower, the Lala Mustafa Pasha Mosque and the Old Kirtikli Bathhouse (Kertikli Hammam).

The historical Venetian Walls of Famagusta are quite special and surround its Old Town area, defining its boundary. With impressive proportions and dimensions of 15 metres / 50 feet high and as much as 8 metres / 26 feet in thickness, the walls were constructed during the early part of the 16th century by the Venetians. 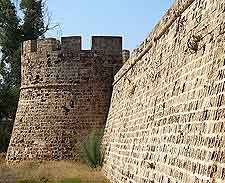 Address: Famagusta, Cyprus
The Venetian walls was built to defend the city from possible attack, with 16 bastions dotted along the walls at strategic places. Today, tourists are able to walk along the Venetian walls, with the stretch around Land Gate (on the Ravelin / Rivertina Bastion) being the most popular. From here, walk past the bastions of Diocare, Moratto, Pulacazara and Martinengo, towards Othello's Tower and the Sea Gate.
Open hours: daily
Admission: free 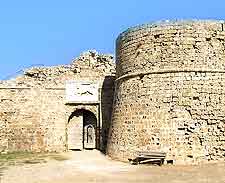 Address: Othello Kalesi, Famagusta, Cyprus
Othello's Tower is perhaps the most famous of all the landmarks in Famagusta and stands on the north-easterly corner of the Venetian walls, where it is also often referred to as simply the Citadel. Othello's Tower is believed to have earned its name from a reference in the famous William Shakespeare play 'Othello', where a stage instruction mentions a 'sea port in Cyprus'. The tower offers good views across the broken city and dates from the 12th century, being built under the Lusignan rule in order to protect both the harbourfront and Sea Gate. It is commonly believed that when Leonardo da Vinci came to Cyprus in 1481, he offered some helpful advice about how the tower could be improved, and it was refurbished and reinforced shortly afterwards.
Open hours: daily - 09:00 to 16:45
Admission: charge 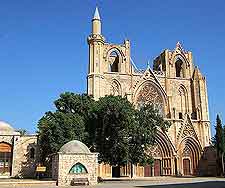 Address: Erenler Sokak, Namik Kemal Meydani, Famagusta, Cyprus
The fine Gothic architecture of the Lala Mustafa Pasha Mosque is renowned throughout Cyprus and was built over a 28-year period at the end of the 13th century / beginning of the 14th century. Based on the designs of the French Cathedral of Rheims and strongly connected to the Church of Agia Sophia in North Nicosia, the Lala Mustafa Pasha Mosque has operated as a mosque since the late 16th-century Ottoman invasion. The mosque was formerly named the Cathedral of Agios Nikolaos and suffered great damage at the time of this invasion, with the addition of a minaret and other changes shortly afterwards. Outside of the mosque, an ancient sycamore fig tree (ficus sycomorus) is a further attraction.
Open hours: daily (visit outside of prayer times)
Admission: charge

The nearby Itimat bus station, located just a short stroll to the south-east, means that this area is always a busy one.
Open hours: daily - 24 hours
Admission: free

Address: Namik Kemal, Famagusta, Cyprus
The remains of the Old Kirtikli Bathhouse is a local Turkish landmark that is often overlooked by tourists and really does deserve searching out. Although the ruins can only offer a glimpse of its former grandeur, with a little imagination, you can picture how its six domes and imposing architecture must have once dominated the area, complete with its vast underground reservoir and heated bathing areas. Alongside these intriguing ruins is an old bar, where you can enjoy a drink.
Open hours: daily
Admission: free