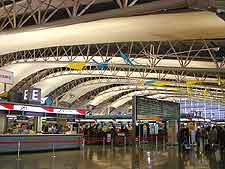 Set on a manmade island, which juts out from Osaka Bay and is accessible via a causeway, the Kansai International Airport and its single terminal is ultra-modern, comfortable and well-set up with all the facilities necessary for a stress-free trip. It is the gateway to Japan's Kansai Province with its famous historic and cultural attractions, including the 'nearby' imperial city of Kyoto with its glorious temples, geisha quarters, Imperial Palace and Nijo Castle, the one-time residence of samurai shoguns.

Known as the Osaka Kansai International Airport to distinguish it from Osaka International Airport, this facility was constructed in 1994 in order to relieve the pressure on its counterpart and is now a hub for All Nippon Airways and Japan Airlines, the two national carriers. On average, some 14 million passengers a year pass through its doors, with flights running to major cities in Asia, Australasia, the Middle East, North America and Europe.

In 2006, Kansai was rated as the planet's fifth-best air facility, with Singapore's Changi taking the crown, followed by the new Hong Kong International Airport, and the air hubs of both Seoul and Munich. The impressive four-storey terminal deals with both domestic and international travellers, with frequent direct flights to Tokyo's Haneda domestic air facility allowing for fast and convenient connections to international routes. Most of the airlines based here are full-service, being accompanied with a few budget carriers such as AirAsia. Routes to more than 70 major cities in some 30 different countries are offered.

Osaka, Kyoto, Kobe and beyond are easily accessed by car via the tolled Skygate Airport Access causeway and the well-signposted Hanshin and Hanwa expressways, although traffic in the region tends towards the heavy, especially during rush hours. The drive into the city centre takes in the region of an hour or thereabouts.

Both limousine and regular buses travel from the airport to Osaka, with the limousine service taking visitors to major hotel destinations in Kyoto, as well as in the city centre. Allow approximately one hour and 30 minutes for this journey.

Train services by two companies, JR West and Nankai, are offered from the airport's train station to the city centre. This service can be used to reach subway connections - Shin-Osaka for the Shinkansen super-express and Kyoto Station.

Taxis are available outside the terminal's Arrivals hall or can be booked online in advance, as can limousine services. Shared minibuses are also available, being provided by MK Skygateshuttles and Yasaka Kanku Shuttles.

For travellers heading to Kobe, a fast ferry service runs directly from the airport to Kobe Airport. Of note, the ferry terminal is connected by a shuttle bus.