Getting Around, Osaka Travel, Transport and Car Rental 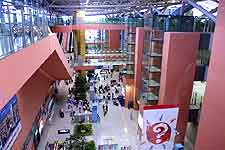 Osaka is one of Japan's main urban transport hubs and getting to the city is easy and convenient. International travellers will fly into modern Kansai International Airport, which has excellent connections to downtown Osaka.

Domestic travel can be accomplished by flying into the older Itami Airport, taking a coach or travelling in style on Japan's stellar train system. Around the city of Osaka, various travel options exist, with a subway system and bus transport being amongst the most popular options.

All international flights into Osaka arrive at Kansai International Airport, which is located around 50 km / 31 miles from the city centre. Kansai also handles a number of domestic flights, but the majority of domestic services use the smaller and older Itami Airport. Japan Airlines and All Nippon Airways operate most of the domestic flights, and a handful of global carriers have routes to North America, the UK, Europe and also travel to many parts of Asia.

Kansai International Airport is open 24 hours and is one of the most modern airports in the world. It was designed to service the entire Kansai Province, so transportation from the airport is excellent. The train is one of the best ways to travel into nearby Osaka, with four different lines servicing the city. Airport shuttle bus transport runs frequently to most of Osaka's larger hotels, and taxis, while extremely expensive, are available if you want privacy and convenience. Car hire travel companies can be found on the first floor in Arrivals. An English-language information desk is located just outside Customs to help with transport needs. 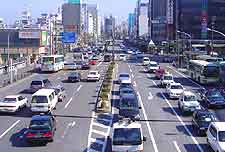 Osaka is a fairly easy city to navigate in a car, thanks to the ample signs in English. Although Japan's public transport system is excellent, you can better explore the countryside with your own vehicle. Japanese drivers are generally courteous and skilled, and all of the motorways are clearly signed in both languages. An International Driving License is required to rent and drive a car, along with basic travel insurance. Car rental kiosks are located on the first floor of Kansai International Airport outside of the Arrivals area. 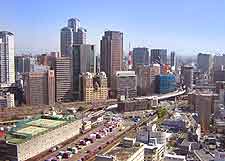 If you are already in Japan, you can use long-distance coach transport to travel to nearly every Japanese city. Once you arrive, Osaka offers an economical one-day travel pass, which is particularly good for transport on all bus and subway routes. However, the public bus system is complicated and none of the route signs are in English, so visitors may want to leave the buses to the locals. The fast and efficient subway is a better means of exploring Osaka. 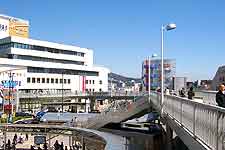 Japanese trains are one of the nicest ways to travel around the country and they steadily roll into the city's Shin-Osaka Station day and night. This central transport hub connects with the subway and local JR Loop Line, which makes a nice circuit around Osaka and passes several attractions along the way, such as Osaka Castle.

The aboveground JR Loop connects with every subway stop in the city, making it fairly easy to get around, although there isn't much English translation on the signs. Osaka subway transport is particularly easy to use since the lines are colour-coded, stations have English translations and station stops are announced in English. The subway trains travel from early morning until midnight, and a one-day pass is the best deal for a day of touring.

There is no problem finding taxi transport in Osaka, either along the streets or at a taxi stand, but your driver probably won't understand English. Therefore, it is a good idea to have your destination written in Japanese. Fares are metered and drivers don't expect a tip, but the rates do go up at night.