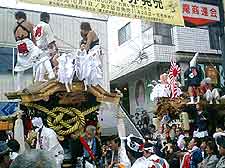 Osaka puts on a busy and varied schedule of cultural festivals, business events and other interesting activities throughout the year. Chances are there will be something going on during your visit that will allow you an insight into Osaka's heritage and party spirit. There are always plenty of things to do around the city, particularly during the summer months.

Especially notable within the city's extensive calendar of events is the Osaka Tenjin Festival, which is amongst Japan's biggest festivals and culminates in an enormous fireworks party.