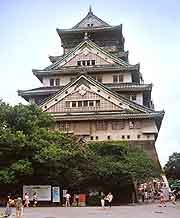 Osaka is Japan's third-largest city by population and historically the country's commercial centre. There are signs of habitation that have been excavated, including buried human skeletons which date back to the 5th century BC onwards, while the migration towards the area's plains increased between 300 BC and 300 AD (the Yayoi period) due to the rise in rice farming.

The Rise of the City

An important part of Osaka's history was its development into a key hub port over the next few hundred years, connecting the area to Japan's western regions. In 645 AD, under the ruling of Emperor Kotoku, the Naniwa Nagara Toyosaki Palace was built and the area became the country's capital.

The capital status was moved some ten years later to Asuka (Nara today), but by then Osaka had established itself as a vital connection, by sea and land, between Nara, China and Korea.

One of the most significant and renowned structures in Japan, Osaka Castle was constructed in the late 16th century by Japanese legend Toyotomi Hideyoshi, after he defeated the Jodo Shinshu Buddhist sect and united the feudal lords. This iconic structure is now one of the country's most visited landmarks and a major part of Osaka's history.

Over the next few hundred years, the city developed into the most important economic centre in Japan. During the Edo period, between 1603 and 1867, Osaka returned to being an important place after nearby regions had earlier taken much of the commerce from it. The city was renowned for its affluent way of living, and both Banraku (Japanese puppetry) and Kabuki (Japanese dance drama) theatres were popular pastimes.

This cultural way of living did not go down well with everyone and in 1827, low-ranking samurai Oshio Heihachiro led a peasant revolt over Osaka's rulers, who seemed unwilling to help the area's poor families. The rebellion was eventually defeated and Oshio killed, but not until one-quarter of the city was razed. 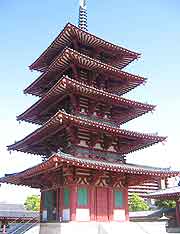 The city became Japan's industrial centre, with large numbers of Korean immigrants being attracted by the rapid industrialisation. Literacy rates were comparably high and education was of a high standard as Osaka boomed. It became renowned for its middle class way of living, along with its love of literature and the arts.

Like so many places in Japan, much of the history of Osaka was destroyed during World War II. The city was bombed regularly during the final year of the war, causing large numbers of people to flee the area, as well as widespread damage to the industrial districts

It didn't take Osaka long to rebuild its infrastructure, and the city was soon playing a prominent role again as a major Japanese cultural and industrial centre.