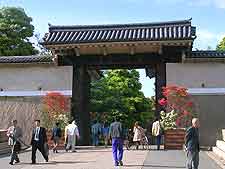 Osaka has a number of important landmarks befitting a city of its size, stature and history. Top on most visitors' list is Osaka Castle, built in the late 1500s.

However, perhaps even more significant in the city of Osaka is the Shitennoji Temple, Japan's oldest religious structure, which attracts a constant flow of pilgrims and worshippers. On a more modern note, there are a couple of famous towers, bridges and one of the country's finest kabuki theatres, all of which have become major landmarks in their own right. Osaka's most significant landmarks can be found below. 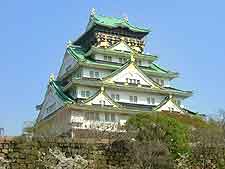 Address: 1-1, Osakajo, Chuo-ku, Osaka, Japan, JP
Tel: +81 06 6941 3044
The legendary unifier of Japan, Toyotomi Hideyoshi built this magnificent castle in the late 16th century after crushing his foes and bringing the feudal lords together. This iconic Japanese landmark is famous for its massive granite stone walls. The eight-storey keep offers wonderful views from the observation platform, and the rest of Osaka Castle houses a museum dedicated to the life and heroics of Hideyoshi. Despite the fact that the explanations are in Japanese, there is still plenty to see.
Open hours: daily - 09:00 to 17:00
Admission: charge 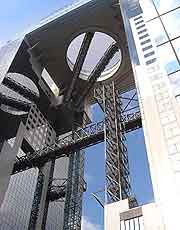 Address: 1-1-88 Oyodo Naka, Umeda Sky Building, Kita-ku, Osaka, Japan, JP
Tel: +81 06 6440 3901
One of the more futuristic landmarks in Osaka is the Floating Garden Observatory, seemingly floating in the air between the twin towers of the Umeda Sky Building. High-speed glass elevators whisk you to the top, but the real thrill is moving along the glass-encased escalator, which bridges the two buildings some 170 metres / 558 feet above the street.

Those with acrophobia may not enjoy the sensation of walking on air, but it really is a giddy experience and the views over the cityscape are simply amazing.
Open hours: daily - 10:00 to 22:30
Admission: charge 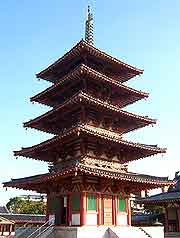 Address: 1-11-18 Shitennoji, Tennoji-ku, Osaka, Japan, JP
Tel: +81 06 6771 0066
Japan's oldest temple was founded some 1,400 years ago by Prince Shotoku, who is believed to have introduced Buddhism to Japan. This is the spiritual soul of Osaka and like most ancient wooden structures, the temple has been destroyed several times, but has always been rebuilt precisely as the 6th century original. Shitennoji Temple itself is classically beautiful, and the newly restored gardens are a real pleasure to stroll through, with their wandering streams, waterfalls and perfectly manicured plants.
Open hours: daily - 24 hours (temple grounds); daily - 10:00 to 16:00 (gardens)
Admission: charge 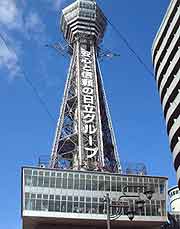 Address: 1-18-6 Ebisu-Higashi, Naniwa-ku, Osaka, Japan, JP
Tel: +81 06 6641 9555
Many Osakans consider this iconic tower the symbol of their city. Originally built in 1912, it stands at more than 100 meters / 328 feet tall and offers a fantastic view of Osaka from its observation platform. Located right in the heart of downtown, there is always lots of activity buzzing around the Tsutenkaku Tower, both day and night.
Open hours: daily - 10:00 to 18:30
Admission: charge