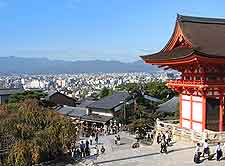 Attractions are plentiful both in and around Osaka, and understandably, many tourists choose to venture outside and explore the many surrounding historical sights. Visitors staying in Osaka often head to the neighbouring city of Kyoto, where the full-time Nishiki Market is amongst the top attractions.

Other cities close to Osaka and worth a look include Kobe and its appealing shoreline, and Nagoya, where a stunning castle, landscaped gardens and innumerable shrines await. Attractions nearby Osaka are shown below. 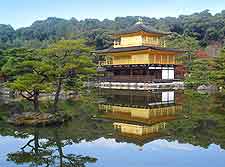 Kyoto is sited to the north-east of Osaka and is a city beyond compare. With a population of around 1.5 million and more neon lights than you might expect, the main attractions in Kyoto include in excess of 2,000 stunning shrines and temples, together with three magnificent palaces and tranquil, landscaped gardens, and much more besides. 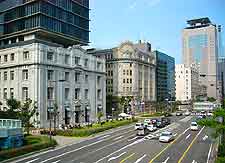 A hilltop city located directly west of Osaka, Kobe is an extremely beautiful city with an attractive coastline to match. With a mountainous backdrop, two neighbouring artificial islands and a major seaport, Kobe's coastline is dominated by its eye-catching Port Tower, a lattice structure built of red steel. Other attractions in Kobe include cable car rides, superb shopping centres, the architecture and restaurants in the Chinatown district, and the art works at the Kobe City Museum. 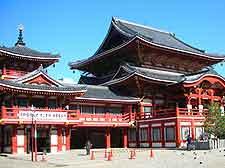 To the east of Osaka you will find the country's fourth-largest city. An important centre of industry, Nagoya stands out as one of the leading tourist destinations in the Aichi Prefecture. The attractions at the historic Nagoya-jo Castle are not to be missed, while further highlights around the city of Nagoya include the Atsuta-jingu shrine, the 10,000 pieces on exhibit at the Tokugawa Art Museum, and the colourful Ran-no Yakata Orchid Gardens.