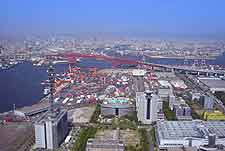 The dynamic and colourful life which lies beneath the grey surface of this densely packed city may come as a surprise to visitors to Osaka. Seemingly just another hectic concrete jungle filled with stressed out businessmen and rowdy, irreverent Japanese youths, Osaka is actually a melange of hidden pockets of historical culture, progressive nightlife and natural beauty.

Take the time to seek out these nooks and you will discover one of the most engaging cities in Japan. Osaka's main districts and locations are shown below. 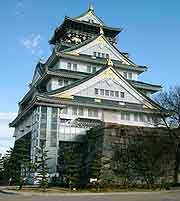 This district is a blend of old and new, with the wonderfully historic Osaka Castle lying just down the road from the sprawling Osaka Business Park. The river runs through this area and makes for some great walks along the riverside trails, which pass by elegant and historical buildings.

This lively nightlife district is littered with restaurants, pubs and love hotels. Also a popular area for gay bars, Doyama-cho is the place to go to experience the rowdy side of Osaka. Just next door is Hankyu Station's massive Hep Five entertainment complex, complete with Ferris wheel, as well as the huge and well-stocked bookstore Kinokuniya. 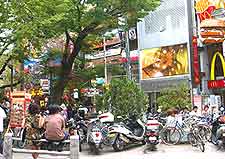 Just a short distance to the south of the Osaka Train Station, the Minami district is easy to reach, by using either the Namba or Shinsaibashi stops on the subway.

This is the perfect place to spend an evening, with highlights including the National Bunraku Theatre, the Dotombori Arcade and the Amerika-Mura (which literally means America Village). 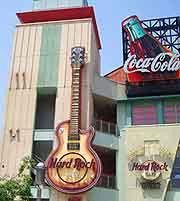 Just off the Nankai railway line is this small but diverse district, with its endless shopping arcade filled with stores of all kinds. The massive brown Swissotel Nankai is also here, as well as entertainment venues such as Osaka's Hard Rock Café and a number of 'indie' nightclubs.

Along the streets of this interesting and eclectic part of town you will find boutiques, trendy bars and restaurants, and ethnic shops catering to the chic crowd of Osaka. Behind the massive Daimaru department store sits the famous Dotombori Bridge, which neighbours another of Osaka's landmarks, Shin Kabuzika, the city's best kabuki theatre. The canals in Midosuji are a particularly scenic and fascinating aspect in this part of Osaka. Take a sightseeing cruise during the day and walk along the canal banks after dark, to see one of the more earthy sides of Osaka. 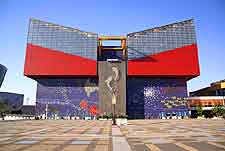 One of the newest areas being developed in Osaka is the harbour district of Nanko. The top attraction here so far is the recently opened aquarium, which is worth a visit on its own merits.

The sea air and light-hearted atmosphere around the Nanko district make this an attractive destination on a sunny afternoon. 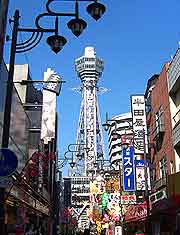 Also known as 'New World', this is Osaka's main electronics district, with hundreds of shops selling discounted gadgets from the creative Japanese industry. The famous Tsutenkaku Tower is here, as is the newish amusement park Festivalgate, with its adjacent Spa World attraction.

The nucleus of Osaka's energetic youth scene is off of the Midosuji subway line. Disembark at Triangle Park, the centre of American Village, and start wandering. While the park itself is nothing special, the streets are lined with chic cafés, bars, shops and best of all, the colourful and undeniably hip young people who hang out here. 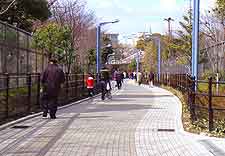 The city's southern district is a massive collection of eating and drinking establishments, which range from modest pubs to high-class dining outlets. Naturally, where there's eating, there's shopping. Also nearby is Tennoji Park, the Zoological Gardens and the highly acclaimed National Art Museum. Culturally, there is an excellent concentration of temples and shrines in Tennoji, including the opulent Shitenno-ji Temple and the avant-garde Isshinji Temple. 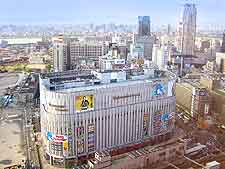 The city's central business district is packed with top-end hotels, high-rises and expensive retail shops. At night, the streets around Osaka's Umeda district are awash with heavy-drinking businessmen, moving from one karaoke bar to another. Umeda comes as close as anything to matching the frenetic pace of Tokyo, but with its luxurious standards, it makes a natural home base for businesspeople and tourists who can travel in style. Well-connected to the subway and train, it is easy to explore the rest of Osaka from this northern district.