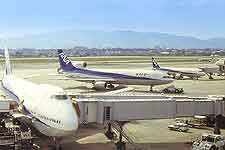 Set within the Osaka Prefecture's Toyonaka district, it provides access to the city's downtown area via a road tunnel underneath the complex. This is a large facility and a busy hub for domestic flights, with its two terminals handling over 14 million travellers each year.

Japan Airlines and All Nippon domestic routes form the majority of aircraft movements here, being backed up by several commuter and low-cost Japanese carriers. The two terminals are labelled South and North, with each dedicated to a list of airlines. The most popular route with business travellers is between Tokyo's domestic hub, Hameda Airport, and Osaka.

Address: Terminal Building, 3-555 Nishimachi, Hotarugaike, Toyonaka, Osaka, 560, Japan, JP
Tel: +81 6 6843 1121
Osaka International Airport is located just 16 km / 10 miles from the city centre, which can be reached via well-signposted roads and a monorail train service, as well as buses and taxis. Traffic in the city is heavy for most of the day, peaking at rush hours and often causing long delays.

If travelling into the city centre by hire car, take the well-signposted tunnel under the airport. This route passes the massive reconstructed Osaka Castle as you approach the downtown area. The drive into the city takes between 40 minutes and an hour.

Limousine buses are the most comfortable and economical way to travel, as they stop at many Osaka city centre hotels, as well as the main train and Shinkansen stations. Municipal buses also run between the airport and the city. The bus journey takes around 40 minutes, although this time is very much dependent on traffic.

The only option for train travel between Osaka International Airport and the city centre is by the monorail service from the airport to its terminal, picking up the Hankyu overground rail line to the city centre. This is generally considered to be a fairly slow and expensive option.

Metered taxi stands are located opposite the entrance to the main concourse, with the trip to the city centre taking some 40 minutes or more. It is worth noting that taxis cost around seven times more than limousine buses.