Osaka Weather, When to Go and Climate Information 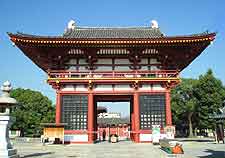 Warm, hot and appealing for much of the year, the climate in Osaka varies noticeably season to season. During the winter months in Osaka, you can expect temperatures to hover around 10°C / 50°F by day and only slightly above freezing at night. The summer weather brings highs of 35°C / 95°F and a fairly humid and muggy climate, when any air conditioning is always greatly appreciated. Much of the weather and temperate climate in Osaka is influenced by its waterfront setting, next to the Seto Inland Sea.

Noticeable climatic periods include the rainy season during June and July, which is known locally in Osaka as the 'tsuyu'. The typhoon season falls between September and the beginning of October, when stormy weather at times can be predicted with reasonably accuracy. However, plenty of fine days can still be expected. 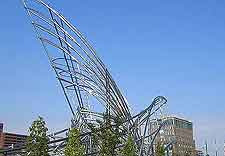 What to pack is clearly influenced by Osaka's climate and when travelling in the summer months, be sure to pack light cotton clothes, to cope with the soaring temperatures and humidity. A raincoat, jacket or umbrella is also an essential item of luggage, since most months feature around ten days when rainy weather is present in some form or other.

The autumn and winter weather in Osaka is noticeably drier and whilst most nights are not frosty, it can feel quite cold, particularly at the start and end of the days. Heavy coats are always a good idea during the winters and although snow is rare, light flurries do sometimes fall in January or February, not usually settling for long. However, by the time that March has arrived, summertime temperatures are not far away and cherry blossoms around the city are spectacular indications of the improvement in the overall climate.