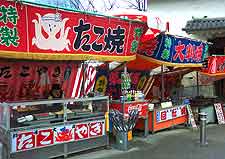 Osaka is a great place to experience authentic Japanese dining, alongside the locals. The best Japanese restaurants in Osaka are often crowded, traditionally boisterous and full of character, with waitresses often dressed in authentic kimonos.

The atmosphere at many of Osaka's restaurants is almost as appealing as the food itself and locals here enjoy eating until they literally cannot manage another mouthful! And with thousands of restaurants and eateries available all around the city of Osaka, you too can prepare to eat yourself silly, known locally as 'kuidaore' - which simply translates as 'eat until you drop'. 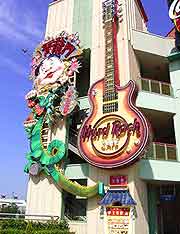 Your trip to Osaka can only be enhanced by making the effort to visit at least a handful of authentic Japanese restaurants, where rice wine (sake) often accompanies your meal. Popular local dishes include: 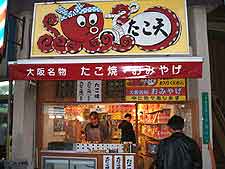 With an almost overwhelming selection of restaurants, fine dining in Osaka is never far away and finding a place to eat is never a problem. Restaurants within Osaka's largest hotels are always a good bet for visitors and are usually particularly tourist friendly, with English menus containing plenty of photographs. Dining in Osaka needn't be a pricey affair, although the most exclusive restaurants are always pricey, especially if you are intending to sample some of the most expensive and daring delicacies, such as blowfish (fugu).

If Japanese food really isn't your thing, then you needn't lose any sleep, since there are also a healthy number of European-style restaurants in many parts of Osaka. These are in good supply at the main shopping centres, such as the ATC entertainment complex and also at the American-style Big Step Shopping Mall, amongst others. Also especially noteworthy is Osaka's Kappa Yokocho shopping centre, which is home to around 40 different eateries, each specialising in their own chosen type of cuisine, both traditional and international, including Italian and Chinese restaurants.