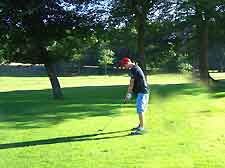 The Osaka Prefecture is home to some of Japan's oldest and most outstanding golf courses, of which both the Ibaraki Country Club and the Naruo Golf Club stand out as being especially important. Of particular interest, the Naruo Golf Club is within easy reach of central Osaka and is well designed, with almost 1,000 members, many of which are retired and over the age of 70.

Other golfing highlights in the Osaka area include the Ono Golf Club in Hyogo and the exceptional Hirono Golf Club. Here are Osaka's main golf courses.

Close to the city of Osaka and home to 36 holes, the golf course at the Ibaraki Country Club has much to offer golfers at all levels. A historic, championship course ranking highly amongst Japan's best golfing offerings, the two separate golf courses at the Ibaraki Country Club are quite different and both feature their own individual set of hazards. The oldest golf course here dates back to the late 1920s.
Open hours: daily - dawn to dusk

Home to one of the most historic courses in the whole of Japan, the Naruo Golf Club lies in the Kansai region and is close to the city of Osaka. Created in the early 1920s and known for its challenging bunkers and rolling terrain, the Naruo Golf Club is highly regarded throughout the area and is a must for serious golfers visiting the city.
Open hours: daily - dawn to dusk

Founded at the start of the 1960s, the Ono Golf Club can be found in Hyogo, close to Osaka. Home to a number of large ponds, well-maintained putting greens and a rolling landscape, this popular golf course contains many difficult holes, making a round here always enjoyable and memorable.
Open hours: daily - dawn to dusk

One of the best golf courses in the country, the Hirono Golf Club is a private golfing club, located in the Kobe area and just a relatively short drive from Osaka. This stunning golf course opened in 1932 and features mature landscaping with many large trees, natural scenery and large ponds.
Open hours: daily - dawn to dusk