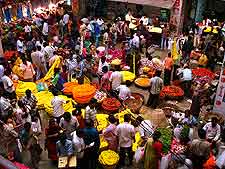 Bangalore is a great place for shopping and many people looking for souvenirs will find the city's traditional Indian silk, Lambani tribal jewellery and detailed wood carvings particularly tempting. Shopping is especially good within Bangalore city centre and visitors can find everything from the latest electrical goods to designer fashion accessories, all at a good price and generally much cheaper than within Western cities.

Malls are a relatively recent addition to the shopping scene in Bangalore, with the city's very first shopping mall arriving at the beginning of the 21st century. This has radically changed the way that both locals and visitors now shop in Bangalore, and new shopping malls are constantly springing up all around the city, particularly on the outskirts. 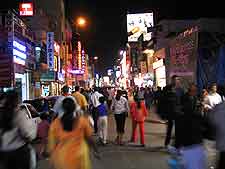 For some of the best shopping in Bangalore, head to the MG Road and Brigade Road area, which caters well for tourists needs. Commercial Street is also a good plenty to find some inexpensive gift ideas and almost has the feeling of a bazaar. For something a little bit more unusual in Bangalore, visit Bannerghatta Road, where you will discover an eclectic collection of shops.

For some serious shopping in Bangalore, the city's many glitzy shopping malls offer the best bet, with several floors of modern stores, together with toilets, cashpoints, food courts and restaurants, and generally good amenities. Particularly popular is the Forum Mall along Hosur Road, which is full of boutiques and located within Bangalore's affluent neighbourhood of Koramangla. Forum Mall is also home to a state-of-the-art multi-screen cinema complex.

Located in the very heart of the city and along MG Road, the Bangalore Centre is a notable shopping centre, resembling a department store in appearance. Other shopping centres include the Garuda Mall on McGrath Road, and the Safina Plaza in central Bangalore, while for a serious spot of window shopping, head to Sampige Road in the Malleswaram area, where you will find a number of grand department stores and also two bustling markets. Within easy reach of the city centre, Marathahalli Main Road is known for its cheap shopping and factory outlets.