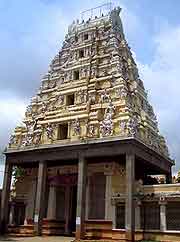 Nowadays a hub for the Indian hi-tech manufacturing sector, Bangalore existed for hundreds of years before its modern incarnation was founded in 1537 by the construction of a fort and temple on the site of the present-day conurbation.

The capital of Karnataka state and known as the 'Garden City' for its plethora of parks, this city offers a laid-back ambience that has made it a popular destination for those interested in the history of Bangalore and the region.

As with most Indian centres of population, Bangalore boasts an early history which involved conflicts between various rulers, beginning with the Muslim Maratha king, Shahaji Bhonsle, whose forces overran the city in 1638.


Mughal armies arrived in 1686, conquering the region and leasing it to the Kingdom of Mysore's ruler three years later. During the three successive Anglo-Mysore wars, British forces attempted to take the city without success on several raids between the 1760s and 1791, when its fort was finally taken by troops under Governor-General of India Charles Cornwallis.

By 1779, Bangalore and its state were part of the British Raj, having been incorporated at the end of the fourth Anglo-Mysore war, when the Mysore ruler Tippu Sultan was killed. British troops remained stationed in the area and the Military Cantonment was established close to the old city.

Attracting a large number of the British Raj elite due to Bangalore's pleasant climate, the Cantonment became a hub for missionaries as well as Anglo-Indians and arrivals from Europe, who joined the military presence in the settlement. Such was the demand that by 1883, three new towns had been added to the original Cantonment area.

During this period in Bangalore history, the city was developing at a fast rate, which caused water shortages. These shortages were solved by the building of massive tanks. However, a drought in 1875 led to two years of famine and a devastating plague hit the city in 1898, resulting in a high death toll and the construction of many temples dedicated to the protective Hindu goddess Mariamman. By now, the city's Cubbon Park central district boasted many imposing colonial-style buildings, including the Bangalore Palace as well as the mansions of the wealthy, which were surrounded by ancient temples and monuments.

At the beginning of the 20th century, Bangalore shot into the modern world when hydroelectric power was introduced, making it the first Asian city to receive this benefit.

More parks and green spaces were formed, and the traditional Malleswaram temple district received several new spiritual centres - it is now a famous cultural hub that is home to gurus as well as practitioners of traditional arts. Since Indian independence in 1947, industrialisation has resulted in even more residential development and the population of the city, also referred to by its Kannada language name Bengaluru, has reached seven million.