Bangalore is brimming with historic landmarks, shrines, monuments and temples, a number of which are famous throughout India. Particularly notable is Bangalore's striking Bull Temple, which features a giant bull statue and an elaborate facade, covered with detailed carvings and figurines.

Within the city centre's Cubbon Park, Vidhana Soudha is hard to miss and features a number of prominent domes, while the Jumma Masjid is the oldest mosque in the whole of Bangalore and well maintained. Other noteworthy landmarks include the Attara Kacheri (High Court), Bangalore Palace and the beautiful Gavi Gangadhareshwara Temple. 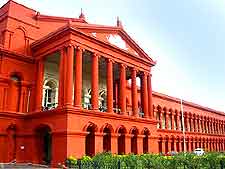 Address: Cubbon Park, Kasturba Road, Bangalore, 560001, India, IN
Sited within Cubbon Park and standing directly opposite the magnificent Vidhan Soudha building, the Bangalore Attara Kacheri is especially eye-catching, being famous for its bright red facade. One of the city's most instantly recognisable landmarks, the Attara Kacheri was built in the mid-1860s and features two floors, being home to the Karnataka state high court, a number of lower courts and offices of the Revenue and General Secretariat.
Open hours: daily
Admission: free 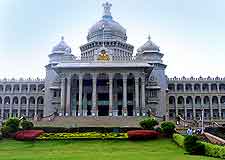 Address: 7 Cubbon Park, Kasturba Road, Bangalore, 560001, India, IN
One of the most imposing edifices ever built in Bangalore, the colossal Vidhana Soudha stands on the north-western side of Cubbon Park and dominates the area. The Vidhana Soudha was built in the mid-20th century by convicts and is famed for its neo-Dravidian style granite architecture and vast interior, being home 300 rooms, the state legislature and the Karnataka secretariat. On Sunday evenings the building is floodlit.
Open hours: daily - view from outside only
Admission: free 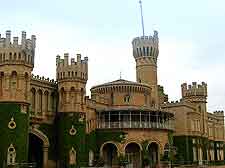 Address: Palace Road, Bangalore, India, IN
Tel: +91 080 233 41778
Located in the very city centre and rather surprisingly based on Windsor Castle, Bangalore Palace was built in the 18890s and features Tudor-style architecture, complete with granite turrets, battlements and towers. The palace was built by the Wodeyar rajas of Mysore and descendants still reside here today.
Open hours: daily - view from outside only
Admission: free

Address: Old Poor House Road, Bangalore, India, IN
Bangalore's most historic mosque, the Jumma Masjid lies within the city's bustling market area and is known for its tall granite pillars. This mosque is amongst the city's most eye-catching and its grand architecture is hard to miss.
Open hours: daily
Admission: charge 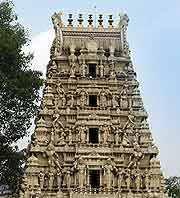 Address: Bugle Hill, Bugle Temple Road, Bangalore, India, IN
One of Bangalore's most elaborate landmarks, the Bull Temple was built during the 16th century and features an enormous monolith of Nandi, the bull of Lord Shiva, which is almost 5 metres / 16 feet in height. The Bull Temple is especially appeal at the weekends, when many street musicians perform here and wedding processions take place.
Open hours: daily - 07:00 to 13:00 and 16:00 to 21:00
Admission: free

A further temple constructed by Kempegowda, the Gavi Gangadhareshwara Temple is dedicated to the much-loved Lord Shiva and features four imposing monolith pillars. The cave temple is at its most popular in the middle of January, on Bangalore's Makar Sankranti Day, when rays of sunlight pass between the hoards of the Nandi bull statue.
Open hours: daily
Admission: free

Standing at more than 18 metres / 60 feet in height and depicting a seated Lord Shiva, this hard-to-miss statue is at its most breathtaking at night, when it is floodlit. The surrounding area is sympathetically landscaped, with a dramatic rocky backdrop and mature trees.
Open hours: daily - 24 hours
Admission: free