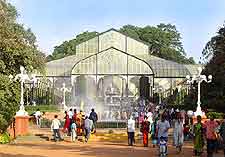 It is fitting that Bangalore is often referred to as a 'garden city', since it is filled with many large expanses of green. Home to a series of large parks and well-maintained gardens, Bangalore has plenty to offer those simply looking for a place to jog, sunbathe, picnic or appreciate Indian horticulture.

Cubbon Park contains many of Bangalore's top sights to see and things to do, while for others, the recreational activities surrounding Ulsoor Lake provide the perfect day out. Also, if you have time, look out for the exotic plants and colourful flowers in the Lal Bagh Botanical Gardens. 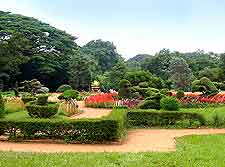 Address: Mari Gowda Road, Bangalore, India, IN
Tel: +91 080 265 73667
Lal Bagh Botanical Gardens lie on the southern side of Bangalore city centre and was established during the 18th century. Covering more than 200 acres / 80 hectares, this delightful parkland features a large number of old trees, an enormous collection of unusual tropical plants, a breathtaking glass house, a tall watchtower and also plenty of red roses, the garden's namesake. Visiting fitness fanatics will be pleased to find that the park's gates open at 06:00 each morning, free of charge, when the many trails are filled with keen joggers.
Open hours: daily - 06:00 to dusk
Admission: charge 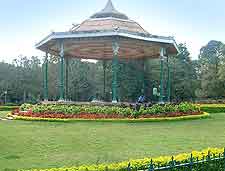 Address: Kasturba Road, Bangalore, 560001, India, IN
Cubbon Park is a vast public space, covering some 300 acres / 120 hectares. Laid out in the 1860s, this park lies in the very heart of the city and is an integral part of local life. With trails suitable for jogging, plenty of seasonal flowers, lush greenery, a children's playground, and large expanses of grassed areas suitable for recreational activities, Cubbon Park is also home to a wealth of local wildlife. Many people visit the park for its wealth of top tourist attractions, which include its magnificent State Central Library, the Government Aquarium, the Government Museum, the Venkatappa Art Gallery and the Visvesvaraya Industrial and Technical Museum.
Open hours: daily - dawn to dusk
Admission: free

Address: MG Road, Bangalore, India, IN
Tel: +91 080 573 114
Ulsoor Lake has become an important tourist attraction in its own right and lies close to the very heart of Bangalore. The lake itself covers an area of more than 300 acres / 120 hectares, and is dotted with small islands. Featuring a range of recreational activities, many locals come to Ulsoor Lake for its boating and pleasure cruises. Plenty of scenic picnic spots and large expanses of grass can be found surrounding the lake, perfect for playing games or simply soaking up the sun. On the north-eastern side of Ulsoor Lake you will find Kensington Park', which is located off Kensington Road.
Open hours: daily
Admission: free

Address: Bannnerghatta Road, Nearby Bangalore, India, IN
Sited just over 20 km / 12 miles from central Bangalore and easily reached by either bus or car, the Bannnerghatta National Park makes for a good day out. This safari park offers you the chance to observe animals at home in a natural habitat. Highlights include lions, tigers, elephants, bison, deer and many other exotic creatures. Also onsite is a small zoo and a popular crocodile farm.
Open hours: daily - seasonal variations
Admission: charge