Bangalore is well placed to explore much of southern India and the Karnataka state, where many appealing attractions reside. Hassan is within reach of Bangalore and contains a mixture of both historic temples and cultural attractions, while for children, consider visiting Mysore and its popular Chamarajendra Zoological Gardens, which was established in the 1890s and contains a number of elephants and giraffes.

Other attractions close to Bangalore include the Nrityagram Dance Village, the town of Ramanagaram, the village of Ramohalli, and Shivaganga, where you can expect to find lots of wild monkeys wandering around, so be sure to hold onto your belongings. Popular attractions nearby Bangalore are described below. 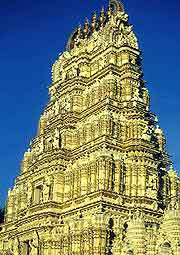 Mysore is a large and busy city, some 140 km / 87 miles from Bangalore. Well known for its local arts and craft attractions, which include sandalwood items and traditional Indian silk, Mysore is home to a wealth of appealing tourist attractions. These include the Mysore Palace, the Mysore Zoo (Chamarajendra Zoological Gardens), Karangi Lake, the Jaganmohan Art Gallery, the Rail Museum, the Regional Museum of Natural History, a number of historic Hindu temples, and also its annual Navaratri (Dasara) festival.

At just over 190 km / 118 miles from Bangalore, the city of Hassan features a population of approximately 120,000 people and is known for its fine weather. Established in the 11th century, Hassan is steeped in history and contains a number of fine temples, such as the 12th-century Chenna Keshava temple. Other attractions in Hassan include the Hasanamba temple, the Siddeshvara temple, and also the District Museum, which contains a collection of art works, weaponry, coins and local artefacts. Hassan is a good base for exploring the area, with Belur, Halebid, Shravanabelagola all being within easy reach.

Tel: +91 80 28466313
Email: nrityagram@gmail.com
Website: www.nrityagram.org
At just 35 km / 22 miles from nearby Bangalore, the award-winning Nrityagram Dance Village makes for a good day trip. Guided tours of the main attractions are available, along with regular dancing demonstrations, offering you a taste of Indian culture. The Nrityagram Dance Village is at its most popular each February, when its Dance and Music festival takes place.
Open hours: Tuesday to Sunday - 10:00 to 14:00
Admission: charge, children 12 years old and under are free for self-guided tours

Offering an array of recreation activities and attractions, the nearby town of Ramanagaram is less than 50 km / 31 miles from Bangalore. Whilst many people come here for the rock climbing and trekking, Ramanagaram is also famous for its bustling silk market, which is amongst the country's largest of its kind. You can also expect to find a good art gallery, a local museum and an outdoor theatre, with regular seasonal performances.

The village of Ramohalli is a scenic spot some 30 km / 19 miles from Bangalore and popular with both locals and tourists alike, who come here to marvel at its Doda Alada Mara (Giant Banyan Tree). Believed to be more than 400 years old, this Banyan tree covers an area of around 3 acres / 1 hectare. Other attractions include plenty of picnic spots and a good restaurant.

Approximately 55 km / 34 miles from Bangalore and known for its two historic shrines, Shivaganga is easy to reach by either car or bus. Particularly impressive are the views from the top of the hill, while other attractions include the local monkeys, which are extremely friendly and inquisitive.