A number of significant museums currently reside within Bangalore and offer the tourist a taste of Indian life in days gone by.

Some of Bangalore's best museums can be found within the grounds of Cubbon Park and include both the Government Museum, and also the exciting Visvesvaraya, which makes for a good day out for families.

Whilst the Karnataka Folk Museum is situated outside of Bangalore, it is within easy reach of the city and is worth a visit, being full of historic folklore exhibits and paraphernalia.

Address: Cubbon Park, Kasturba Road, Bangalore, 560001, India, IN
Tel: +91 080 228 64009
The Visvesvaraya Industrial and Technological Museum is managed by the National Council of Science Museums (NCSM) and is a particularly popular attraction. Each of the floors celebrate a particular part of science, such as the electrical displays within the Electro Technic Hall, the rockets in the Space Hall, the animatronics in Dinosaur Corner, and also the Fun Science Hall, where you will find a host of interactive exhibits.
Open hours: daily - 10:00 to 17:30
Admission: charge

Address: Cubbon Park, Kasturba Road, Bangalore, 560001, India, IN
Tel: +91 080 228 64483
One of the oldest museums in the whole of India, the Government Museum can be found within Bangalore's Cubbon Park and adjacent to the popular Government Aquarium attraction. With beautiful stone columns and grand architecture, the building itself is fairly impressive and dates back to the mid-1880s. Inside you will find a number of important collections, including coins, local artefacts and relics, antiquities and some art works. The neighbouring Venkatappa Art Gallery is especially impressive and often combined with a visit to the Government Museum.
Open hours: Tuesday to Sunday - 10:00 to 17:00
Admission: charge 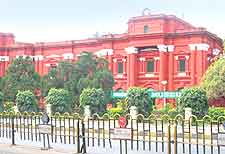 Address: Kumara Park West, Sheshadripuram, India, IN
The Karnataka Folk Museum is located outside of the city in nearby Sheshadripuram, being just over 50 km / 31 miles from central Bangalore and easy to reach along the Bangalore-Mysore highway. There really is something here for everyone, including literally thousands of folklore items, films of folk dancing, puppets, weaponry, historic utensils, a magnificent carved temple chariot and a recording studio, while outside you will find an amphitheatre area and also a small boating lake.
Open hours: Wednesday to Monday - 09:00 to 17:00
Admission: charge