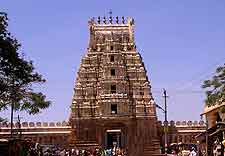 In the mid-1980s, the city of Bangalore was split into two main districts, known as the 'Urban' and 'Rural' districts. Each of these areas of Bangalore can be further divided into smaller towns, villages, 'taluks' (administrative units) and neighbourhoods.

The Bangalore district as a whole is surrounded by many nearby appealing locations, such as Anekal, Chamarajanagar, Kolar, Mandya and also Tumkur. Within the city itself, many of the main attractions lie off MG Road, a particularly notable thoroughfare. Bangalore's main districts and smaller neighbourhoods are described below.

The Bangalore Urban district contains the city itself and many of the main sights. This region is further divided into the North, South and also the Anekal districts, comprising more than 600 village communities in total. Anekal lies approximately 40 km / 25 miles from Bangalore city centre and is known for being home to Muthyalamaduvu, a superb picnic spot with excellent views of the surrounding hills, with other attractions including both the ancient Kambada Ganesha and Sri Bandi Mahakaliamma temples.

The Bangalore Rural district comprises in excess of 1,000 different villages and towns, being known for its agricultural and dairy farming, with crops including rice and sugarcane. Many locals living here regularly commute to the city centre, where the main companies reside. Bangalore's Rural district is a good place to visit if you want a break away from city life and would like to see more of the countryside.