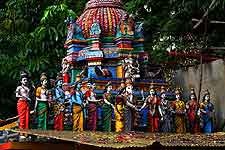 There are always plenty of things to do in Bangalore, whatever the time of year. Hindu festivals have long been an integral part of life in Bangalore and are often based at the city's many prominent temples, such as the historic and rather beautiful Bull Temple.

With snake charming, costumed processions, concerts and many public holidays, such as the Independence Day each August, look out for the Ganesh Chaturthi celebrations in September, the Dussehra Festival (Durga Puja) and Diwali (Deepavaali) each October, and the Bangalore Habba each December, which are amongst the city's main events. Bangalore's most noteworthy annual events are shown below.