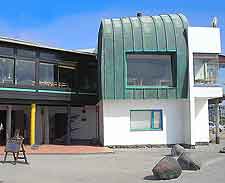 Whilst many of Namibia's restaurants serve dishes that give more than a passing nod towards the country's German heritage, the variety of cuisine on offer is definitely widening. From Argentina to the United States of America, many different country's cuisines are represented around the main towns and cities of Namibia.

Restaurants are increasingly able to accommodate vegetarian diners, although finding something to eat off the dining menu might be more of a struggle at those eateries specialising in traditional game-based German cuisine.

Popular restaurants, particularly those located in Windhoek and Swakopmund, can get very busy in the evening, so it is essential to book in advance in order to avoid disappointment. 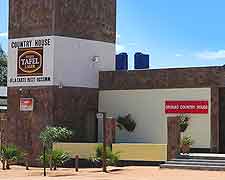 Dining out at lunchtime is popular in Namibia, and as a result of this demand, visitors can expect to find plenty of cafes and restaurants opening during the day.

Many open for snacks and light meals from around breakfast time, closing in late afternoon. It is worth remembering that a large proportion of restaurants offer more limited opening hours at the weekend - indeed, some choose to close completely on Sundays. 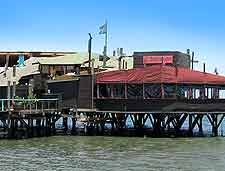 As you would expect from a country that borders on the Atlantic, seafood plays an important part in Namibia's dining scene. Although a large proportion of the daily catch ends up being exported, some delicious fresh seafood is kept back for locals and visitors to enjoy. Such seafood delights include prawns in peri peri sauce, rock lobster and oysters. The latter are farmed along the coast of Namibia.

Many of the country's local dishes are heavily influenced by its strong German heritage. Dishes are mostly centred around meat, whether it be beef, mutton, springbok, crocodile, zebra, kudu or chicken. Sausages are popular, as are meat barbecues, known as braaivleis, and biltong, meat that is air-dried. Potjiekos is essentially a one-pot meat 'bush' stew. In fact, much of Namibia's cuisine is conjured up outdoors, over an open fire. Look out also for pica pau, which is essentially a plate of small pieces of meat served with sauce. 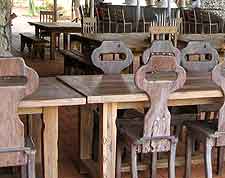 Meals are mostly accompanied by pap, a porridge made from maize, although alternatives are corn bread, cassava, millet or rice, along with beans and vegetables. Fresh fruit is easily come by in Namibia, so for dessert, oranges, pineapples and bananas are top of the list. Cakes and pastries are also widely available.

In Windhoek, the Hotel Heinitzburg provides gourmet international cuisine in the centre of the city, as well as spectacular views over the city skyline. Steakhouses abound in Windhoek and indeed in many other towns and cities in Namibia. Perhaps the best known in Windhoek is Joe's Beer House on Nelson Mandela Avenue, an eclectic diner which is now a firm favourite with both tourists and locals. This beer garden of a restaurant is full of character, with many of the game-meat based dishes cooked on an open fire under the stars. However, there isn't just traditional and Germanic-influenced cuisine available in Windhoek. 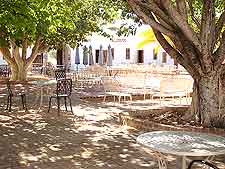 Many restaurants, such as the TAAL Indian Restaurant, serve international dishes. Japanese sushi is on offer at the Maerua Mall, while the O'Portuga on Nelson Mandela Avenue specialises in traditional Portuguese food. On top of these, Windhoek is home to any number of Chinese restaurants.

In Swakopmund, favourite dining haunts include The Tug, an oceanfront restaurant located aboard an old tug, offering seafood extravaganzas with scenic vistas of the Swakopmund jetty. Other popular eateries include the Lighthouse Pub and Restaurant, which has great views of the beach. The Raft at nearby Walvis Bay is also located on the beach, making it a great place to dine out whilst watching the sun go down. 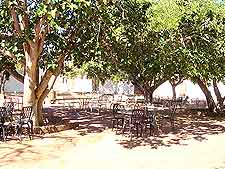 Visitors should find a reasonably good choice of places serving fast food. Many of these have sprung up in Namibia's shopping centres, particularly Maerua Park. On offer are burgers, barbecued chicken and pizzas. Nando's is a well-known international chain of fast-food restaurants serving Portuguese-style barbecued chicken as well as a wide range of other dishes. The Windhoek branch is situated on Independence Avenue. Takeaway pizzas are to be found at Harry Peppar in Walvis Bay.

Stumbling across Namibia's many German-style bakeries may at first seem rather odd, especially if you happen to be in a desert location. However, once attuned to the Germanic influence on much of the cuisine of Namibia, including its cafes, visitors can look forward to their morning coffee being accompanied by delicious pastries, and even the odd Black Forest gateau. In Windhoek, one of the more popular dining establishments is the Craft Centre Café based on Tal Street.

If you are on safari, you can usually rest safe in the knowledge that you will be offered good, wholesome food. Choice can be limited, however, with many camps favouring table d'hôte dining menus.