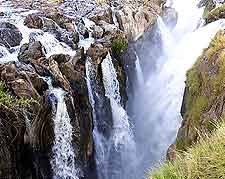 Due to its desolate coastline, extensive deserts and lack of water, Namibia history was relatively late in coming, although various peoples have lived here for eons.

Named after the Namib Desert, the country would eventually become part of the German Empire, when natives were slaughtered and colonial landmarks were erected. South Africa later ruled, through apartheid prior to Namibia becoming independent in 1990.

The region was inhabited by San hunters around the time of Christ, while Nama herders passed through and settled here in 500 AD. The Herero and Ovambo folk, of the Banu tongue, didn't come on the scene until the 1300s, and just a century later, Portuguese navigators were exploring the coast.


Historically, Namibia developed slowly, due to its lack of arable land, and it wasn't until the 18th century that English missionaries passed through here. While the British landed Walvis Bay in 1878 as an annex to South Africa, it was the German Empire that eventually colonized the country after Adolf Luderitz purchased Luderitz Bay, then named the Bay of Angra Pequena. 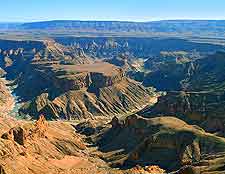 Namibia became a German Protectorate in 1884 and was known as German Southwest Africa (Deutsch Südwestafrika). Treaties were signed and Germans cultivated the land, while protecting the masses militarily. However, the natives, including the Khaua, the Mbanderu and the Swartbooi, began to grow weary and formed rebellions.

The Old Fort in Windhoek hails from this era (1890) - the official time of the capital's founding, and is the oldest building still standing in the city. Another popular and rather historic Namibian landmark in Windhoek is the Franke Tower, of Erich Franke fame, a German officer who defeated the Omaruru in 1904 after a long march. Of interest, the name Windhoek means 'Wind Corner' in Afrikaans.

The war with the Hereros and the Namas (from 1904) ceased in 1908, by which time the natives were completely washed out. The quartz sandstone Christ Church (Christuskirche) in Windhoek - dubbed the 'Church of Peace', was built in 1910 and is one of the most distinctive of the capital's landmarks, standing on the Robert Mugabe Avenue. It is testament to this long period of strife in the history of Namibia.

To truly experience a bizarre little hangover from German misadventure in Africa, visit the quant town of Swakopmund, which still has 'Konditorei' cafes serving up traditional German-style food, such as fleisch salad (pork sausage, pickles and mayonnaise) and knackwurst sausages. There's German architecture and the odd native speaking with a Bavarian tongue, curiously. 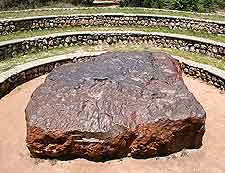 History settled down for Namibia - post rebellions. Diamond fields were subsequently discovered and railways established, while there was compulsory schooling for Namibians and re-ownership of farmland. However, with the German's loss of control following the start of WWI, South Africa took control of Namibia through the League of Nations. The Hoba Meteorite was discovered around this time in Grootfontein, as were myriad rock engravings in the World Heritage Site that is the Twyfelfontein valley.

The UN abolished the South African mandate of control in 1966, after which South Africa rebelled and refused to give up Namibia. Decades of strife ensued with SWAPO (the liberation movement named the South-West Africa People's Organisation) resisting, and apartheid was imposed on its people. In 1968, the country was renamed from 'South-West Africa', becoming known as Namibia and governed independently, with a stern hand of guidance from Pretoria. During the decade of the 1980s, the country was full of South African troops fighting a border war with Angola, as it sought to destabilise its Southern African neighbours who were harbouring anti-apartheid and socialist / Marxist revolutionaries.

With the Cold War over and a sudden change of heart among the new White leadership in South Africa, Namibia finally attained political independence on 21st March, 1990 (now, Independence Day), with SWAPO being the only democratic party. Successful politician Samuel Daniel Shafiishuna Nujoma became the first President of Namibia and, four years later (1994), South Africa returned Walvis Bay. The country was now open for business and tourism.

The country is today most popular with adventurists - some visiting the Skeleton Coast for its lonely sand dunes and shipwrecks, others for the curious Himba tribe in the north-west. Many landmarks remain - in Windhoek and the colonial town of Swakopmund mainly, reflecting the history of Namibia. However, the oldest historical monument is surely the Gibeon Meteorite, thought to be in the region of 600 million years old. Namibia history is best garnered at the National Museum (Alte Feste) based on Windhoek's Robert Mugabe Avenue.