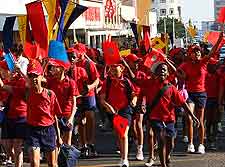 Namibia's towns and cities host a variety of art and music festivals, trade fairs and shows, and other events throughout the year. Many of the top events and things to do are of course clustered around the capital city, where you can choose between the Bank Windhoek Arts Festival each February, the Karneval in April, the Science and Technology Fair every July, and the Windhoek Show in October.

Also held in Windhoek is the Oruuano of Namibia Arts Festival, which actually takes place twice a year, first in September and then a second time in November. Public holidays are also important events in this country, with highlights including Independence Day in March, Africa Day and Ascension Day every May, Heroes' Day in August, and International Human Rights Day each December.


Namibia Calendar of Festivals and Events