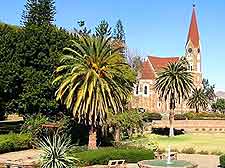 Namibia is divided into four main areas, namely Caprivi (north-east) and the Northern, Central and Southern regions. Outside of the urban areas of Windhoek and Swakopmund, and away from the popular coastal resorts, Namibia's main towns are relatively small in size and generally scattered over a large area.

It is worth making the effort to visit at least a few, however, since it is through these relatively remote places that you can get a real insight into the life of most ordinary Namibians. 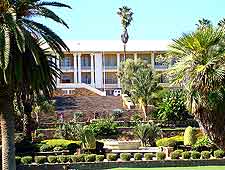 The capital city of Namibia, Windhoek is surrounded by the mountains that make up the country's Central Highlands. Apart from being pleasantly situated, the city itself also has plenty to offer. Visitors can explore Windhoek's tree-lined avenues, whilst admiring the rich German colonial architecture that can be found there. Major tourist attractions include the historic Alte Feste and the Tintenpalast (Ink Palace). Windhoek is as relaxed an African city as you are likely to find, making it the ideal place to start off your African adventure. More information about Windhoek.

Gobabis lies some 200 km / 124 miles east of Windhoek, in central Namibia. The town came into being in the mid-1850s when the Rhenish Mission Society set up a mission station on the site. Today, Gobabis is a lively small town and a hub for those travelling to and from Botswana.

Located in north-east Namibia, Grootfontein is a popular stop-off point for many tourists. The town was founded in 1885 by Boer families headed from South Africa. Grootfontein has much to offer, from lush green scenery and historic sites, to banking facilities and accommodation. One of Grootfontein's top attractions is the nearby Hoba Meteorite. Others include the Das Alte Fort Museum and 'Tree 1063', a giant baobab tree that has its roots in African legend. 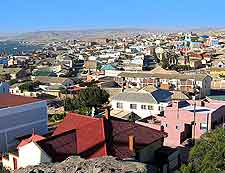 Luderitz's striking appearance is brought about both by the cultural influences of it German past and its dramatic desert backdrop. Many of the town's buildings have been built in a distinctive 19th-century German style, which dates back to the period of German colonialism in Namibia. There's lots to interest visitors to Luderitz, from the town's museum and Lutheran 'Felsenkirche', to its lively harbour and beautiful untouched beaches.

The Southern Namibian town of Karasburg acts as a useful and popular transport hub thanks to its position close to the South African border and its busy railway station. Sheep farming plays an important part of the local economy in Karasburg, while kudus, a species of antelope, can often be spotted roaming around the region.

Karibib started out life as a watering hole. Then, in the late 1900s, the railways arrived, transforming Karibib into a military outpost. With the later discovery of gold and other minerals, Karibib was revived once again. Today, visitors come to see the products of Karibib's prospecting endeavours, including pure black marble, gold, amethyst, tourmaline, aquamarine and quartz. Karibib's Henckert Tourist Centre is a good place to buy locally made jewellery and other handcrafted goods.

Katima Mulilo is a small riverside town on the north-eastern tip of Namibia's Caprivi Strip. Turbulent politics in recent years have resulted in calls for a separate independent state. Politics aside, however, the town has some interesting architecture that dates back to colonial times. Katima Mulilo also sits amidst stunning scenery. From Katima Mulilo, it is possible to cross the border into neighbouring Zambia. 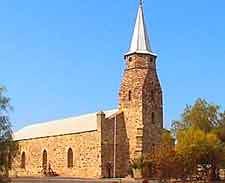 Roughly 500 km / 310 miles south of Windhoek, Keetmanshoop is an important hub for travellers in the south of Namibia. Keetmanshoop is a pleasant enough place to stop over, with attractions that include a museum and tourist information centre. Nearby is the Kokerboom, an ancient quiver tree forest that has been declared a Namibian National Monument.

Some 260 km / 161 miles south of Windhoek, Mariental is perhaps best known for being the location of the Hardap Dam. Whilst the dam has a practical purpose of damming the Orange River, for visitors it also serves as a base for recreational activities, including water sports such as canoeing and boating, as well as fishing. Hiking is also a popular pastime here, while freshly cooked fish served at a restaurant with excellent views across the Hardap Dam is something of a must if you are here at lunchtime.

Okahandja is situated just 70 km / 43 miles north of Windhoek. Today, the town is a bustling small town with an abundance of independent shops, as well as larger businesses. Okahandja's current quaint appearance belies its turbulent past. In 1850, Okahandja witnessed a historic battle between Jan Jonker and his allies, and the Herero-speaking people. 'Moordkoppie' or 'Murder Hill' can be seen on the Karibib to Sakopmund road. Visitors to Okahandja can look forward to a relaxing trip to the Gross Barmen Hot Springs Resort or a more invigorating retail therapy experience at Okahandja's two excellent woodcarvers' markets.

Otjiwarongo is a prosperous town that offers plenty in the way of tourist facilities, including supermarkets, banks and restaurants. Nearby tourist attractions include a craft market, the Otjiwarongo Crocodile Ranch, a wildlife sanctuary and several private wildlife reserves. Otjiwarongo is reputed to be the cheetah capital of the world, and as well as being home to the Cheetah Conservation Fund, there's also a nearby cheetah and leopard rehab centre. 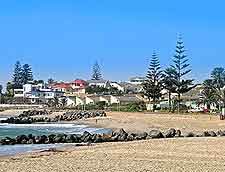 A busy city situated on the north-western coast, Swakopmund is to be found about 275 km / 171 miles to the west of Windhoek. Swakopmund has become a busy seaside resort with a lively harbourfront and is known for its splendid colonial architecture and strong German character. The city regularly draws in keen surfers, anglers and a general beach crowd, while in recent years it has started to promote its adventure sports opportunities, such as skydiving, quad-biking, sandboarding, hot-air ballooning, pleasure flights, rock climbing and even camel safaris. More traditional attractions include the National Marine Aquarium, the Hansa Brewery and a number of museums.

More a place to simply get things done rather than a popular tourist destination, Oshakati was officially established in the mid-1960s and has retained an authentically African feel. If you happen to be in Oshakati to visit the bank and stock up on groceries, then the town's large market is definitely worth a visit. 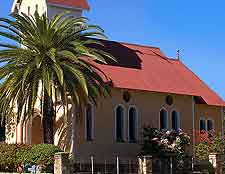 This bustling town in northern Namibia has much to keep visitors well entertained. As well as the town's museum, with its collection of minerals, there is also a cultural village, an old mine, and an arts and crafts centre. Tsumeb is also a convenient base for Etosha National Park and visits to nearby Otjikoto Lake.

Rundu is situated north-east of Grootfontein. The town makes a good stopover for travellers, although there's little in the way of actual tourist attractions. If you have a few spare hours, then it is worthwhile paying a visit to the Mbangura Woodcarvers' Coop in the town centre, or simply soaking up the distinctly Portuguese atmosphere that pervades Rundu. 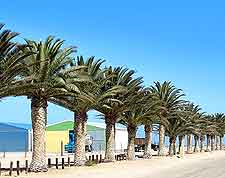 Founded in the late 18th century, Walvis Bay remained under South African rule until as late as 1994. As Namibia's only deep-sea harbour, with direct access to Africa's main shipping routes, the town feels quite busy. Indeed, the town has a flourishing fish industry and sea salt fields. Local marine industry aside, Walvis Bay's biggest attraction has to be its huge population of seabirds, which live in the bay's natural lagoon. Also of interest is a small museum and an information centre where you can find out about local birdlife. More adventurous visitors can try out the many beach and aquatic sports on offer in the area, or pay a visit to Dune 7, the tallest sand dune in the region, situated on the edge of town.